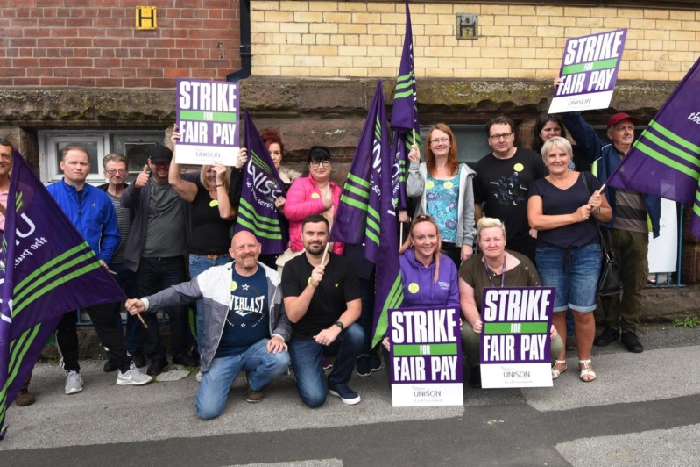 Drug and alcohol support workers employed by We Are With You have announced the end of a long-running trade dispute with their employer- more than fifteen months after they first took strike action.

The strike involved thirty rehab workers and UNISON members who had been transferred from the National Health Service to We Are With You. The workers maintained throughout the dispute that their employer had promised that their pay would keep pace with NHS Agenda for Change pay rates but that the charity failed to keep their promise once NHS staff received a substantial pay rise in 2018.

The key workers entered into dispute with their employer well over a year ago to secure NHS pay rates and they have taken a mammoth twenty-six days of strike action since August 2019, including a ten-day strike which ended in October of this year. The striking workers have received ongoing political support from current and previous local MPs Lisa Nandy, Yvonne Fovargue and Jo Platt as well as Deputy Leader of the Labour Party Angela Rayner and Shadow Health Secretary Jonathan Ashworth.

Throughout the dispute, We Are With You denied promising its employees that it would pay NHS rates and refused to budge during negotiations- but charity bosses’ position appears to have softened in recent months. And now the drug and alcohol workers have formally ended their dispute as they have emerged victorious with a new settlement, which was agreed this week.

The Wigan and Leigh support workers have secured a no detriment payment  that matches the NHS Agenda for Change three year pay deal which runs from April 2018 to April 2021, meaning that the key workers will each receive several thousand pounds worth of back pay. In addition, they have negotiated a further year of protection which will ensure that the rehab workers will not be paid below the current NHS rates until April 2022.

In a further boost for the drug and alcohol workers, they have also won a battle to force their employer We Are With You to recognise UNISON as their trade union. The rehab workers began their campaign to be represented collectively through UNISON in 2019 but their employer refused to negotiate with the union.

But the Central Arbitration Committee (CAC) recently declared UNISON to be the recognised union for We Are With You workers in Wigan and Leigh. This decision means that We Are With You will be forced to negotiate with the support workers collectively through their union UNISON from now on, including during any future pay reviews.

UNISON North West regional organiser Paddy Cleary said: “The determination of this group of key workers must be commended- they continued their struggle when many would have faltered. They knew that they were right and that We Are With You was firmly in the wrong- they have been proven correct.

“This dispute is a fantastic example of what can be achieved when workers stand up together. And beyond pay, the legacy of this struggle is that this group of workers have found their voice and now have the right to negotiate collectively with their employer. This will benefit staff and service users alike, as front-line workers are the real experts and make the best decisions for the service.

“These inspirational workers have continued to provide a vital lifeline to members of the local community throughout the pandemic- it’s only right that they should receive the pay they are rightfully owed just before Christmas. Now they can once again focus entirely on their life-saving work.”