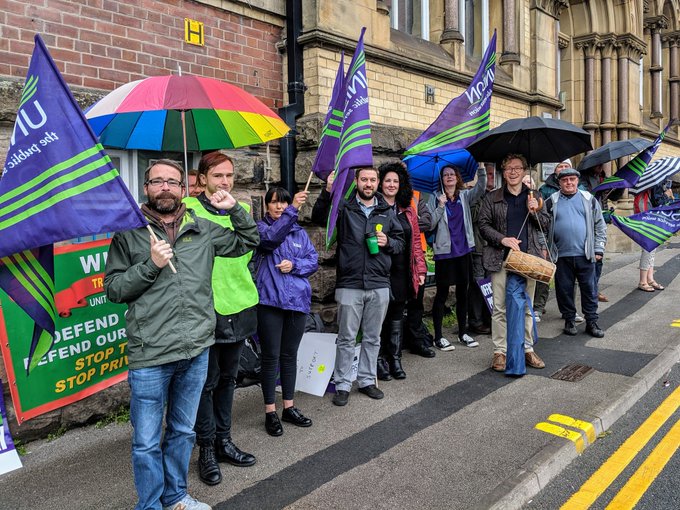 Staff employed by Addaction in Wigan and Leigh have taken further strike action on Wednesday 11 and Thursday 12 September after the latest round of talks failed to make a breakthrough.

Thirty-one drug and alcohol support workers are acting over pay and broken promises. The staff were previously employed by the NHS but the service, commissioned by Wigan Council, was transferred to the London-based charity.

Workers continued to receive pay rises in line with those of NHS employees and were given assurances by the organisation’s managers this would continue into the future.

But when the 1% pay cap in the NHS was removed from April 2018, Addaction refused to implement the promised wage rise.

After exhausting the internal grievance process, staff were balloted by UNISON and there was a 100% vote in favour of strike action. A third round of Acas talks will take place on Tuesday 24 September to find an end to the dispute.

Wigan MP Lisa Nandy has thrown her support behind the striking workers. She said: “Supporting people to overcome drug and alcohol addiction is an incredibly tough job and makes a difference for every single one of us in Wigan.

“Addaction’s employees deserve the pay settlement they were promised when they moved from the NHS to Addaction and I am determined to stand with them and with UNISON to make sure they get it.”

Kathryn Herbert, a drug and alcohol worker and UNISON rep, said: “We are incredibly disappointed and feel very let down.

“We didn’t plan to strike but the lack of empathy shown towards us has actually strengthened our resolve and leaves us with no alternative but to continue our strike action for fair pay.”

“Many workers turned down the opportunity to take jobs within the health service as they were assured they would continue to receive full NHS pay when they transferred to Addaction. The employer refused to honour this commitment at the first opportunity.

“These committed staff remain steadfast in their demand for the pay rise repeatedly promised by Addaction. Meanwhile, their employer delays and obfuscates at every turn, showing no desire to resolve what is ultimately a simple issue.

“We hope it proves third time lucky at Acas and Addaction arrives ready to pay staff what they’re owed. This is the only way to end the ongoing strike.”

UNISON members are holding a rally today (Thursday) at The Bellingham Hotel in Wigan. Local MPs Lisa Nandy and Jo Platt will speak in support of the striking workers.