Wigan and Leigh drug and alcohol staff to strike on Friday 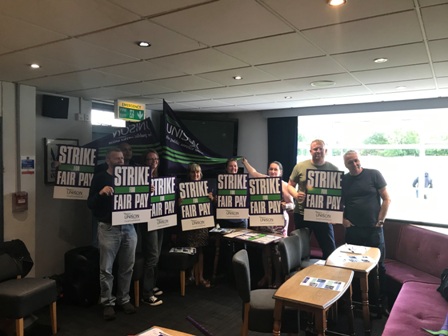 Strike action involving 31 staff employed by Addaction is set to go ahead after Acas talks did not reach a resolution to their dispute on Wednesday.

A 100% vote for strike action was prompted by Addaction’s failure to keep its promise to pay staff the NHS rates for the job. Their union UNISON says that the striking workers stand to lose up to £1000 per year.

The staff are support workers within a drug and alcohol service which is commissioned by Wigan Borough Council. They used to be employed directly by the NHS, and Addaction promised staff that they would continue to receive pay rises in line with NHS rates of pay.

Support workers have been left frustrated as the employer has reneged on this pledge, refusing to implement the NHS three year pay deal which came into effect in April 2018.

Addaction has its headquarters in London and provides services all over the country.  It has an annual income in excess of £70million.

“I never expected to have to go on strike, and I don’t think many of my colleagues did either. We have agonised over this question.  But the fact that 100% of us voted to take action shows how strongly we all feel about this issue.

“We’re all willing to stick together to secure the pay rise we were promised.”

“Addaction have given repeated assurances to staff that they would receive the NHS pay deal, but they have gone back on their word.

“This dedicated group of support workers have been out of pocket for 16 months and have been forced to take strike action by an employer that just won’t listen.

“We had hoped that the Acas talks would be successful, but the local and regional managers who attended made no offer to staff and seemed to have no authority to reverse decisions taken nationally.  Assurances made by managers to staff in Wigan and Leigh seem to have been ignored and overridden by bosses in London.

“Our members voted 100% in favour of taking strike action. They are willing to do whatever it takes to secure the pay rise they’re owed. I would strongly urge Addaction to reconsider its position and pay up now.”