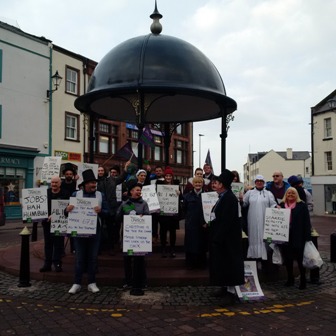 “Mayor Starkie has his priorities upside-down, and he’s trying to ignore staff concerns about services and the Council’s future.”

Copeland Borough Council staff will be holding a Dickensian-themed public demonstration at Whitehaven Market Hall today (Thursday) from 11.30am-2pm to highlight the damaging choices being made by Mayor Mike Starkie.

Staff who work for the Council in services including Benefits, Revenues and Customer Services face a worrying Christmas as the Council intends to cut 28 jobs (1).  Staff are concerned that services will suffer as the public will find that it takes longer to contact the Council or have their benefits processed.

“I have been very impressed with the dedication of the predominantly female and low-paid workforce at Copeland Council.  The staff have identified alternative ways that the Council could save money without adopting the Mayor’s cuts plan – but they have been ignored so far.   Staff are worried about the future of the services that they provide for the public, and of course many are fearful for what the cuts would mean for their own families.

“Council staff have had their pay rises capped at 1% but in stark contrast Mayor Starkie has seen his pay go up by 67% this year.  People in Whitehaven will be questioning whether the Mayor’s salary represents good value-for-money.

UNISON has highlighted Mike Starkie’s role as a partner at True Potential Wealth Management, whose website states that he gives advice to individuals and businesses on how to “reduce their tax burden” (2).  Jenny Martin continued:

“In his day job, Mike Starkie helps people minimise the amount of their wealth that they contribute in tax.  Now as Mayor, his plans to make cuts in the Revenues department could compromise the ability of the Council to collect much-needed income. We are concerned that the Mayor does not properly appreciate the importance of everybody paying their fair share in order to fund the public services that we all rely on.

“Mayor Starkie has his priorities upside-down, and he’s trying to ignore staff concerns about services and the Council’s future.  Staff are so frustrated that there is a real chance of strike action before Christmas.  I think the Mayor should show some modesty and listen to the real public servants who have devoted their working lives to serving their local community.”

(1)    The Council plans involve a reduction in what it calls ‘Support Services’ from 85.7 FTE (full time equivalent) roles to 68.9.  The Council have notified the trade unions that up to 28 staff could be made redundant.