We will chase the Tories out of town 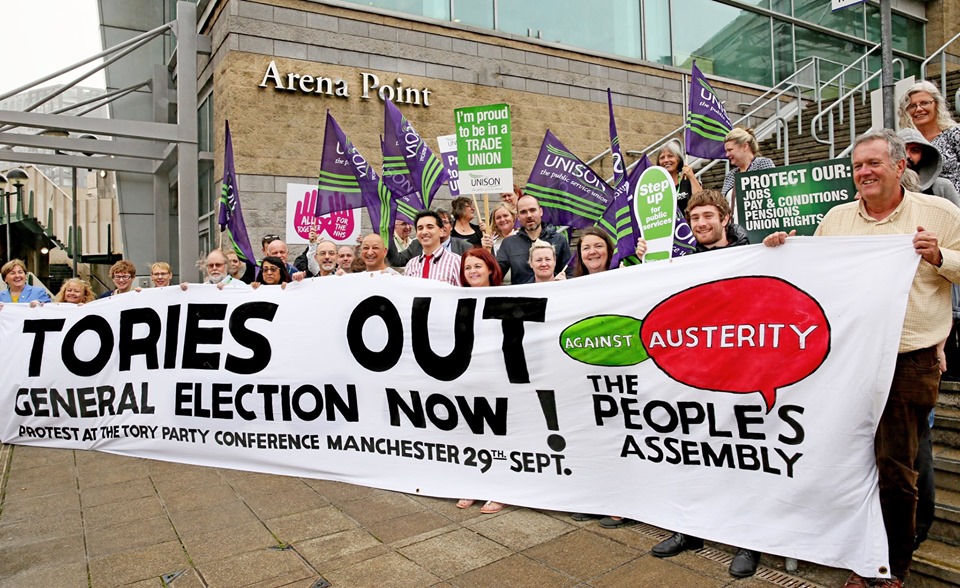 UNISON set to lead the protest at the Conservative party conference in Manchester.

UNISON branches nationwide are preparing to protest at the Tory Party Conference on 29 September.

This isn’t the first time UNISON has played a central role in protesting at the Conservative party conference in Manchester.

UNISON members in the North West, who have been fighting on the front line of public service cuts for the past decade, are leading the demonstration.

UNISON regional convenor Paula Barker said: “Our members have suffered a decade of ideologically-motivated spending cuts which have left our public services on the brink.

“Councils in the North West have been some of the worst hit in the country. Cuts have devastated our communities, costing livelihoods and in some cases, costing lives.

“And yet the Tories have the cheek to turn up on our doorstep and expect us to roll out the red carpet – they will receive no such treatment. UNISON North West will play a leading role in chasing the Tories out of town.

“Whether this is your first demonstration or you’re a seasoned protester, this is your opportunity to stand together with other UNISON members and say that enough is enough.”

Members in the North West are currently involved in two industrial disputes, with hospital workers in Blackpool and St Helens currently in the midst of three-day strikes.

UNISON regional Secretary Kevan Nelson said: “The two industrial disputes which our members are engaged in currently are a direct result of the damaging austerity and outsourcing agenda pursued by Tory governments throughout the last decade.

“In both cases, workers who would have previous been employed directly by a council or the health service have seen their pay and working conditions eroded after being outsourced.

“Our members working for Compass are asking for a pay rise of less than £1 per hour, and yet the multi-national behemoth, which made £1.7bn in profit last year, refuses to pay up.

“We can and will win these disputes. But make no mistake, these workers should never have faced this hardship and it is only a change of Government which can turn the tide on outsourcing, privatisation and cuts.”

Tens of thousands of people are expected to attend.

If your branch is planning to attend, please email [email protected] Please provide information about estimated numbers of attendees and whether your branch is arranging coach travel for your members.