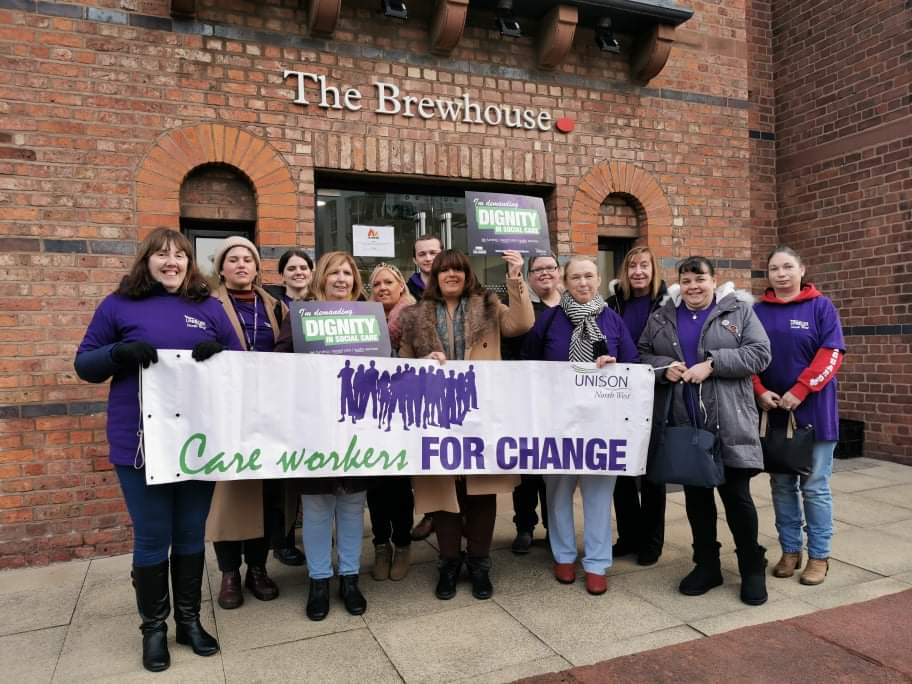 Warrington care workers have today (Tuesday) delivered a petition to Catalyst Choices’ head office, in opposition to their employer’s proposed cuts to the care workers’ pay and working conditions. The petition was handed directly to Chris Ball, the local care company’s Director of Operations.

Private firm Catalyst Choices – which has been providing care services for Warrington since 2015 – is planning to reduce the pay of former council workers outsourced to the company. As part of their transfer, staff were guaranteed the same pay and conditions as council workers.

The proposed cuts have been met with stiff opposition by the predominantly women workforce. One unnamed Catalyst worker stated: “Decisions are being made before staff  are consulted, we are the frontline of looking after our most vulnerable. Yet they want to cut our pay, affecting our livelihoods.”

Charlotte Nichols, newly elected MP for Warrington North has come out in support of the workers, she said: “Care workers are the backbone of our community and provide a vital public service looking after the most vulnerable people in our society.

“It is a skilled job looking after people with increasingly complex needs given our ageing population. You can’t get quality care on the cheap.

“I urge the Government to urgently invest in social care and for Catalyst to ensure their staff are paid fairly and that their trade union is recognised to give carers a voice in the workplace.”

Many staff are frustrated with Catalyst Choices’ refusal to negotiate with them collectively, through their union UNISON. UNISON North West regional manager Kevin Lucas said: “Catalyst choices are running a sham consultation and they are failing to take into account the views of staff or service users.

“Front line care workers are facing substantial losses to pay, at a time when chronic understaffing is already putting service users at risk. UNISON hope that care workers' wishes, for negotiations with staff through their union, are respected.”

Staff transferred out of the council in 2015 to social enterprise Catalyst Choices. During the TUPE transfer they retained local government terms and conditions but Catalyst choices are proposing cuts including but not limited to a reduction in weekend enhancements, overtime pay and sick pay.