The staff will no longer be paid just the legal minimum wage but receive the NHS rate for the job. 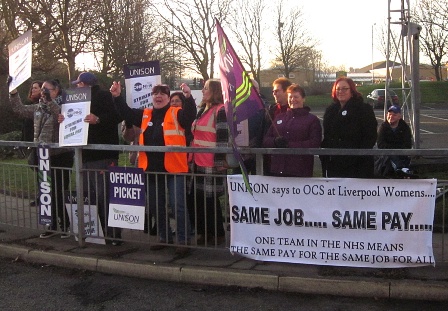 UNISON members who work as domestics, catering staff, porters and security staff at Liverpool Women’s Hospital have won their campaign to secure NHS rates of pay.

The staff will no longer be paid just the legal minimum wage but receive the NHS rate for the job.  This is worth more than £1 an hour, and over £2,000 a year for full-time staff.  Staff will also as part of a 3 year deal get the same payments as their colleagues for working anti-social hours, overtime and weekends.

The pay increase is to be jointly funded by the private contractor OCS and the Trust.

Staff took three days of strike action on 25 February, 11 March and 13 March.  The strike action planned to begin on Monday 1 April will now not take place.

“Justice had been done at last.  All hospital workers are part of the NHS team and they should all be recognised for the important work they do.

“It is unfortunate that our members had to resort to strike action to get treated fairly, but the support from hospital colleagues and the public has helped staff to stick with it to the end.

"We hope that other privateers working in the NHS sit up and take note of what has happened at the Women's Hospital.   Private contractors will be challenged where they are taking profits out of the NHS by underpaying hospital workers.”