“The university has a duty to be a good employer and to serve the local community where they are based." 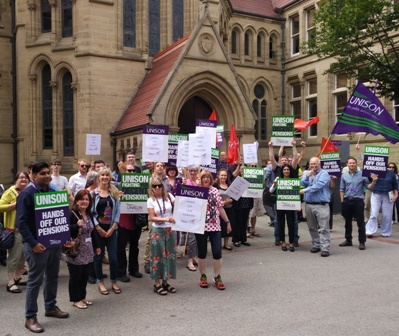 Support staff at the University of Manchester face plans to cut their pensions by more than 20%.

The affected staff work in technical, manual and administrative roles; including cleaners, catering staff, security staff and administrators.  Over 4,000 current scheme members stand to lose out, along with future employees of the university.

The university is consulting over plans to save money by cutting retirement incomes accrued through future contributions.  The proposed 20% cut in the accrual rate would mean that a security guard on £22,000 would lose £1,375 per year in retirement, while a cleaner on £14,000 would lose £875 each year.

The plans would involve pensions being calculated on a ‘career-average’ basis, which would reduce the retirement income further for staff who are promoted at any point in their career.  The plans would also mean that the scheme would be closed to new members and new staff, and replaced with a riskier ‘defined contribution’ scheme.

“The university has a duty to be a good employer and to serve the local community where they are based.  But this plan is an attack on the retirement incomes of the university’s lowest paid workers, most of whom are women.  If these cuts are allowed to go ahead, thousands of retired households in communities in Manchester would have less income and less security in the future.

“We have seen the lecturing staff go on strike recently to protect their pensions.  Support staff are angry and we will be opposing these plans very strongly during the consultation process.  If the university presses ahead with these swingeing cuts we cannot rule out the possibility of industrial action.”