The council is backing UNISON’s campaigns on ending the public sector pay cap and promoting dignity in social care. 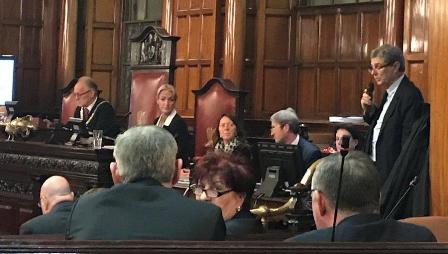 Liverpool City councillors have unanimously passed a motion that recognises the damaging impact that the pay cap has had upon public servants across the city, and on the services they provide. The motion calls on the government to provide the necessary funding so public sector employees can be given a decent pay rise.

The motion also recognises the effectiveness of the union's Pay Up Now! campaign, which will see the issue of public sector pay debated in Parliament next month. The Westminster debate – which takes place on 4 December – was secured after more than 145,000 people signed the union's petition.

UNISON general secretary Dave Prentis came to Liverpool to address the full council on the need for a pay rise.   He said:

“Public sector workers across Liverpool have been struggling to get by ever since the government decided to freeze and hold down their pay more than seven years ago.

"Ministers say the cap is no more, but if the chancellor doesn't come up with any new money in the budget next week, the only way local councils like Liverpool would be able to fund a pay rise would be by cutting jobs and services. And no one wants to see that.

"If we value our public services, we must value those that deliver them too. The time has come to give all council, health, school, civil service and police employees a long overdue pay rise.”

Liverpool City Council has also signed up to the principles in UNISON's ethical care charter which aims to improve the quality of care in the city.  It is pledging to commission care packages of at least 30 minutes, and to work with the care sector to improve pay and training for staff.

"Liverpool Council’s commitment to ethical care is very welcome.  UNISON will continue to work with all six authorities in the city region to pursue better standards in the sector through the Care Workers for Change campaign. Decent employment conditions for care workers are vital for improving the quality of life for the people they look after."