Branch secretaries from every UNISON police branch in the North West met with the Shadow Home Secretary Andy Burnham this week to discuss the issues facing all our members. 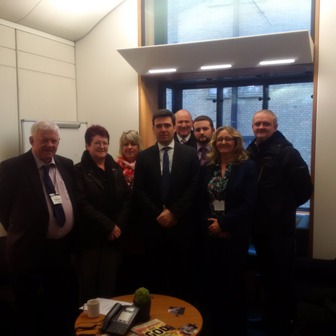 Cuts over the past five years were identified as a central concern.  There was a shared view that the new funding formula proposed by the Government - which created such chaos and threatened many members’ jobs - has not gone away completely and must be challenged when it returns.

The response to the proposed new funding formula - particularly  in the Lancashire and Merseyside campaigns - highlighted the depth of public support that is there for our services, especially for community policing.  These campaigns, alongside opposition days organised by Labour, played their part in the Government’s u-turn on police budgets.

Discussion also covered the key roles support staff play, including during the recent floods in Cumbria, and the need to publicise the importance of support staff.

We concluded our discussion on concerns about the future use of volunteers.  We expressed the view that forces facing continued budget pressures should consider appropriate civilianisation, not cut support staff jobs to the bone.

Andy Burnham and his team committed to  follow up our discussions with fact-finding visits to the region to look specifically at the part our members play in keeping the public safe.  Your branch, regional and national leaders in the North West ‎will build on this first meeting to ensure  your voice and concerns will continue to be raised at every level.