UNISON on the March 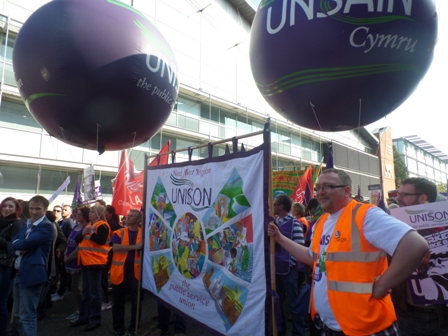 There was a massive turnout from UNISON members yesterday in Manchester at the national demonstration 'No to Austerity, Yes to Workers' Rights'.

They came in their tens of thousands to Manchester’s biggest demonstration for generations. Up to 100,000 ordinary folk demanding that the government ends its policy of austerity, ends its attacks on the weakest in our society and ends their vindictive assault on trade unions.

North West UNISON branches and their placards were much in evidence at the TUC and People’s Assembly march in Manchester on Sunday 4 October 2015. The sun was out and festival of colour and noise assembled along the entire length of Oxford Road from All Saints Park as far as Manchester Royal Infirmary and beyond.

Lancashire Care, Rochdale, Sefton, Manchester, Cumbria and North Lancashire Health, Manchester Metropolitan University, Manchester University, Knowsley, Salford City, Central Manchester Healthcare, Lancashire Ambulance Service, Tameside – all were there. So many purple and green banners and placards it was difficult to catch exactly who was there.

All of society was there. The very old to the very young. In wheelchairs and mobility scooters to prams and buggies. Many more young adults seemed to be taking part. People of all colours and religions, political and non-political groups were out in force. Union placards and balloons were bolstered by some splendid home-made banners.

The Tory Party Conference was taking place in the Manchester Convention Centre – the old Central Station. But they were a world apart from the protestors – both intellectually and physically as the conference centre was defended by an eight feet tall steel barrier.

Those on the march enjoyed a wonderful feeling of common purpose and comradeship. It confirmed what we already knew: people matter. We are people who want to protect the old, the young, the vulnerable and the weak. And it is clear that the government wants to dismantle the welfare state, setting people at each other’s throats, blaming the sick and the needy while the bankers and the billionaires get even greedier. There’s much to do. If you’re not in a union join one. Write to your MP and Councillors. Write to the papers and tweet and e-mail your friends and family. Let’s not let them get away with dismantling all we hold dear… 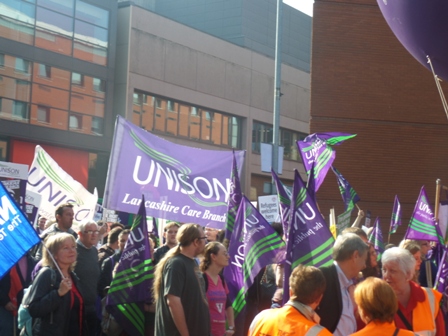 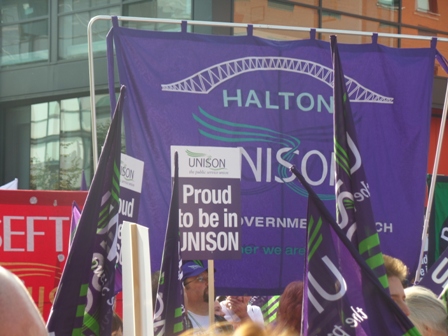 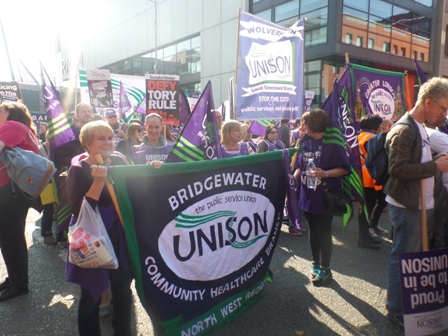 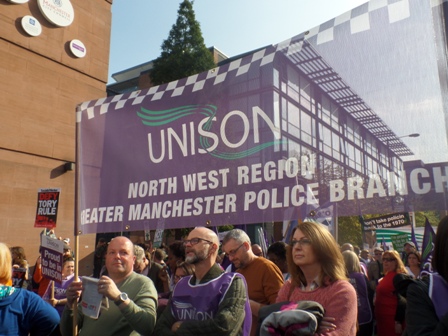 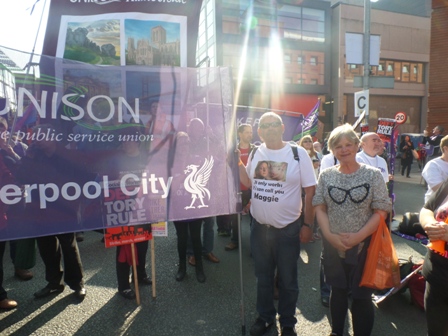 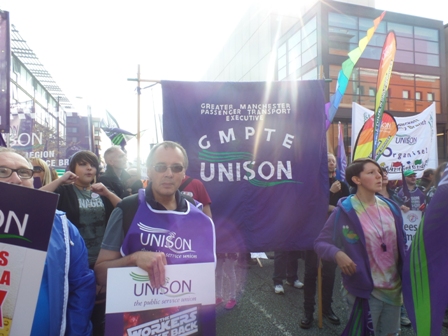