UNISON Members are Working Flat Out

As wind and rain batters the north of England, Dave Prentis pays tribute to our members. 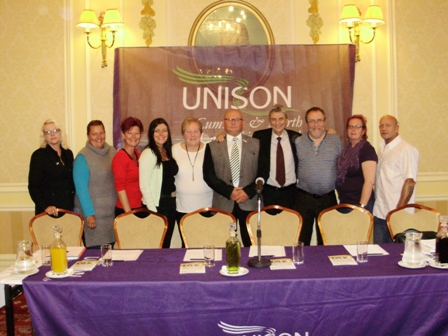 As wind and rain continues to batter the north of England – particularly in Cumbria – I want to pay tribute to all our people who are working flat out to keep people safe and save as many homes and businesses from the rising waters as possible.

The region saw a staggering 32cm of rain fall over the weekend, with UNISON members across the services – from local government to police and fire services, the NHS, the Environment Agency and more – battling the chaos that the elements have delivered.

It’s less than two years ago, in February 2014, that I was writing something similar, as the government then tried to blame the agency for flooding – while it planned to cut ever more deeply into the services that protect us.

UNISON members are on the front lines when disasters like this strike – and as politicians heap praise on them for the work they’re doing now, it needs be remembered that public services need resources and people to provide them. Praise now and more cuts later would be the height of hypocrisy.

And it’s also worth adding that these are the third major floods to hit this area of England in just 15 years – no coincidence when we think how the climate is changing.

So while UNISON is calling on the government to provide full help and support for the communities that are now dealing with such devastating weather, the world’s governments must stop wringing their hands and find ways to protect our climate, our world and all our peoples.