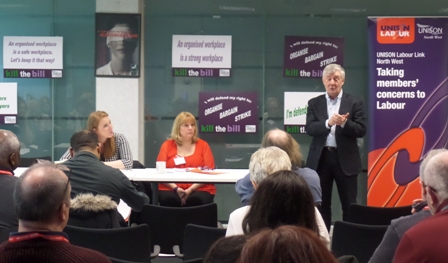 UNISON is proud to be supporting Tony Lloyd’s campaign to become Labour candidate for Mayor of Greater Manchester.

Tony, the current Mayor and Police and Crime Commissioner is seeking the backing of the party to be their first candidate for elected Mayor.

“Tony has always been a great friend to UNISON, our members and the wider trade union movement.  Tony has great empathy with ordinary people and understands the importance of high-quality public services.  He has worked hard throughout his career to fight inequality and protect working people across Greater Manchester.

“I’m delighted that UNISON have given me their support.

“UNISON and the wider trade union movement have got a key role to play in building a fairer society. That’s why they’ll always have a direct line to me. I want to build a fair Greater Manchester for everyone. That’s the Greater Manchester way.”