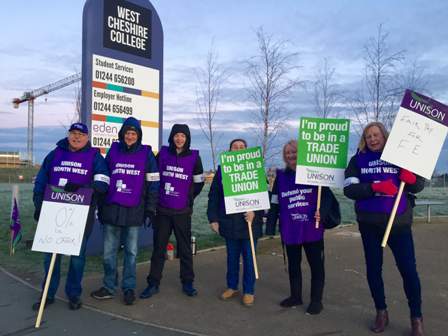 You can link to photos from around the North West region here:

Thousands of staff at further education colleges across the North West are set to walk out today (Wednesday) causing major disruption to lessons.

Lecturers, librarians, technicians, cleaners and caretakers who belong to UNISON and the University and College Union (UCU) are among those taking part in the one-day strike over pay.

The protest is against a recommended pay freeze by the Association of Colleges, following several years where staff have had very low pay rises, resulting in a real-terms pay cut for some of up to 17 per cent.

UNISON General Secretary Dave Prentis – who is to show his support for striking workers by visiting a college picket line in London later today – said:

"Some colleges have promised their employees a pay rise, but the vast majority are determined not to budge from the zero per cent recommended. We urge the Association to follow the example of those more enlightened colleges who want to come back to the table to try to resolve this dispute.

“The real villains in this dispute are government ministers, whose funding cuts over several years have left colleges in dire financial straits. But it shouldn't be further education employees paying the price.

“After years of pay freezes and real terms pay cuts, staff have been left with no choice but to take action to win a fair deal. It’s time for the college employers to do the right thing, get back around the table and make a decent pay offer that rewards all college staff for their dedication and hard work.”

“A pay freeze is an insult to the commitment and enthusiasm of staff working in further education, and fails to address the real-terms pay cut they have suffered in recent years. Strike action is always a last resort but our members are clear that the Association of Colleges needs to return to the table with an appropriate pay offer in order to resolve this dispute.”

There is a regional strike rally taking place in Manchester, 12.30pm-2pm.  Strikers from colleges in Manchester, Liverpool, South Cheshire and Bolton will be attending.  The venue is the Mechanics’ Institute, 103 Princess Street, Manchester M1 6DD.  All Welcome.