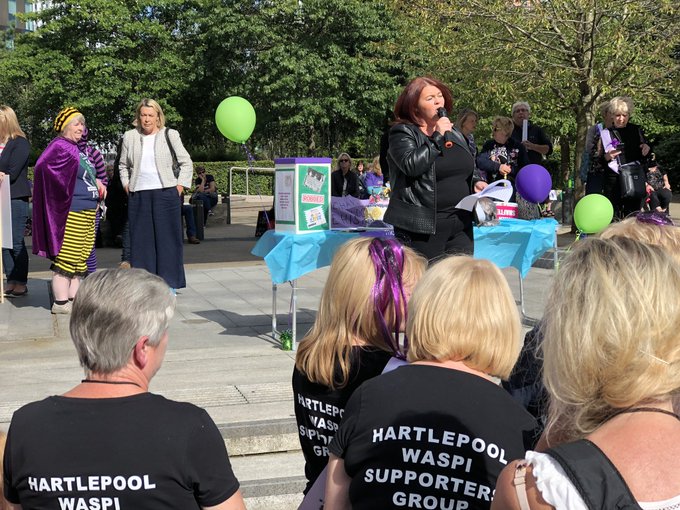 Last weekend, I was delighted to speak at The Great Pension Robbery, a rally organised by the Women Against State Pension Inequality (WASPI) campaign.

The Government has treated 3.8m women with disdain, implementing significant changes to pensions with no thought for the impact they would have on women who were born in the 1950s. Without the unrelenting work of WASPI campaigners, this unfairness would simply have been swept under the carpet.

UNISON is the UK’s largest trade union with over one million women members. We are the largest membership organisation for women in the UK. We were the first trade union to affiliate to the official WASPI Campaign and we stand shoulder to shoulder with the WASPI women and their brave fight for justice.

As I heard on Saturday, changes to the state pension age have been unfairly imposed upon working women up and down the country. The unjust and poorly planned changes have had huge financial and emotional impacts for many women. Government policy has created a state-led home wrecker which has visited millions of households- leaving devastation, hardship and poverty in its wake.

UNISON members have propped up our public services during the financial crash and the following decade of austerity. Our nurses, our paramedics, our care workers- they have kept this country going against all the odds as the Tories have cut public services to the bone. These women are national heroes, and they deserve to be treated as such. But they are not asking to be treated like heroes, they are simply asking to retire in dignity. Irreversible decisions have been made by these nurses, paramedics and care workers in the expectation of retiring at 60. As the Government continued its ideological assault on the public sector, many UNISON members accepted early redundancy or retirement, only to find that they could not collect their state pension for another six years.

And whilst there has now been an ‘equalisation’ of the state pension age, there has been no such ‘equalisation’ of the jobs market. Older women remain one of the groups of workers who are discriminated against most often, especially when it comes to securing new employment. As a result, many of the nurses, paramedics and care workers who had accepted early retirement were then forced to accept zero hours, temporary and low paid contracts, which offer no financial security.

These women have paid their national insurance; they have kept their side of the social contract between citizens and state. And yet the Government have reneged on their side of the bargain, in many cases with little or no warning. The state pension is not a hand-out, or a privilege- it is a core duty of the Government to support its citizens in retirement. They have broken their social contract to 3.8m hard-working women and it is a national disgrace.

The changes to pension age, which have been implemented with no regard for equality, were developed by two Tory-led Governments- firstly in 1995 and then in 2011 during the ConDem coalition. They certainly condemned millions of women to a future of uncertainty, adversity and frustration. It is no surprise that it is two Conservative Governments which have chosen to attack working women. The WASPI women have faced a double whammy. The Tory Government has piled on further hardship by penalising the women and their families through draconian reforms to our welfare system, including cutting pension credit. In doing so, they poured salt onto the wound for millions of women.

This is part of a wider Tory agenda to attack pensions. Just last week, you would have been forgiven for thinking that Jacob Rees Mogg was retired, as he reclined on the House of Commons front bench as if it were a sun lounger, but it is he and his cronies who would have us work until we drop. A recent report by Ian Duncan Smith’s right-wing think tank has suggested that the retirement age be increased to 75.

The UK is one of the richest economies in the world. The UK has the lowest state pension in the developed world. Life expectancy is falling in this country after a decade of austerity. Life expectancy in Salford, where I spoke on Saturday, is just a few years higher than 75. Rees Mogg’s dream of returning this country to Victorian times when working class people were worked to death may become reality.

What’s more, the mismanagement of changes to the pension age for women has been all but ignored by our national news network. BBC, or Boris’ Bile Channel for short, has refused to cover what is an undeniably significant national scandal.

Thankfully the indefatigable WASPI campaign has now brought this issue to light and is pushing for a better way forward. WASPI started as five women on social media and is now a huge national campaign, it stands as an inspiring example of grassroots organising. The Government thought that women would accept this mistreatment but how wrong were they? UNISON will stand with WASPI campaigners until they get exactly what they are owed.

We may be presented with a huge opportunity for the WASPI campaign in the near future. A General Election would hand us a momentous chance to hold politicians’ feet to the fire on this issue. We must secure a strong commitment from parliamentary candidates to right this wrong.

And we can win! Earlier this year, the FBU secured a huge national victory against the Government over discriminatory changes to fire fighters’ pension scheme. For the nurses, the paramedics and the care workers who have worked their whole lives only to be told they had no pension- we must stick together, we must keep fighting and we will win.