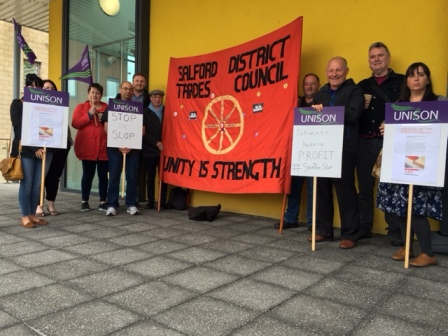 Patient catering campaigners this (Monday) morning lobbied the Salford Royal Trust Board in a bid to stop the Royal’s kitchens being closed down as they met to decide whether to outsource the service to a so-called ‘cook-chill’ company which will provide factory-made food to patients.

The campaigners presented the Board with their petition which has amassed 2,200 signatures from concerned hospital staff, patients and members of the public.

The Board refused to make the decision about the future of hospital food in front of concerned campaigners, claiming it was commercially sensitive.  They also refused to answer questions from a worried patient about why they have failed to consult with the public about the proposals.

Addressing the meeting, Trust Chief Executive Sir Dalton stated that it was necessary to move to ready meals in order to drive up standards, yet recent patient catering satisfaction ratings have been around 90%.

He also claimed that the new menus will offer more choice to patients.   However campaigners believe that with trained chefs and fresh ingredients the choices that can be offered to patients are currently much greater.

Campaigner and UNISON Regional Organiser Wendy Allison was at the meeting and said:

“At this morning’s Trust Board meeting David Dalton claimed outsourcing patient catering could save the Trust £1.2million that would be spent on radiology equipment.  However, we are sceptical that greater investment in frontline health services  will be realised by this plan.  The Trust intends to replace the kitchens with shiny new offices and they have not told us how much this will cost.

“Over time, we think privatisation will prove to be a false economy.  The unnamed preferred provider is saying it can undercut the current provision by 35p per patient per day but we expect that when the contract is up for renewal and there is no in-house service to compete with, the price will rise steeply.  This has been seen elsewhere.

“The current service offers excellent quality and value for money.  We hope that once we were asked to leave the room this morning the Trust Board members made the right decision.  To ignore the concerns of 2,200 people would be the wrong move.  The Board needs to be open and accountable to its patients and employees.”