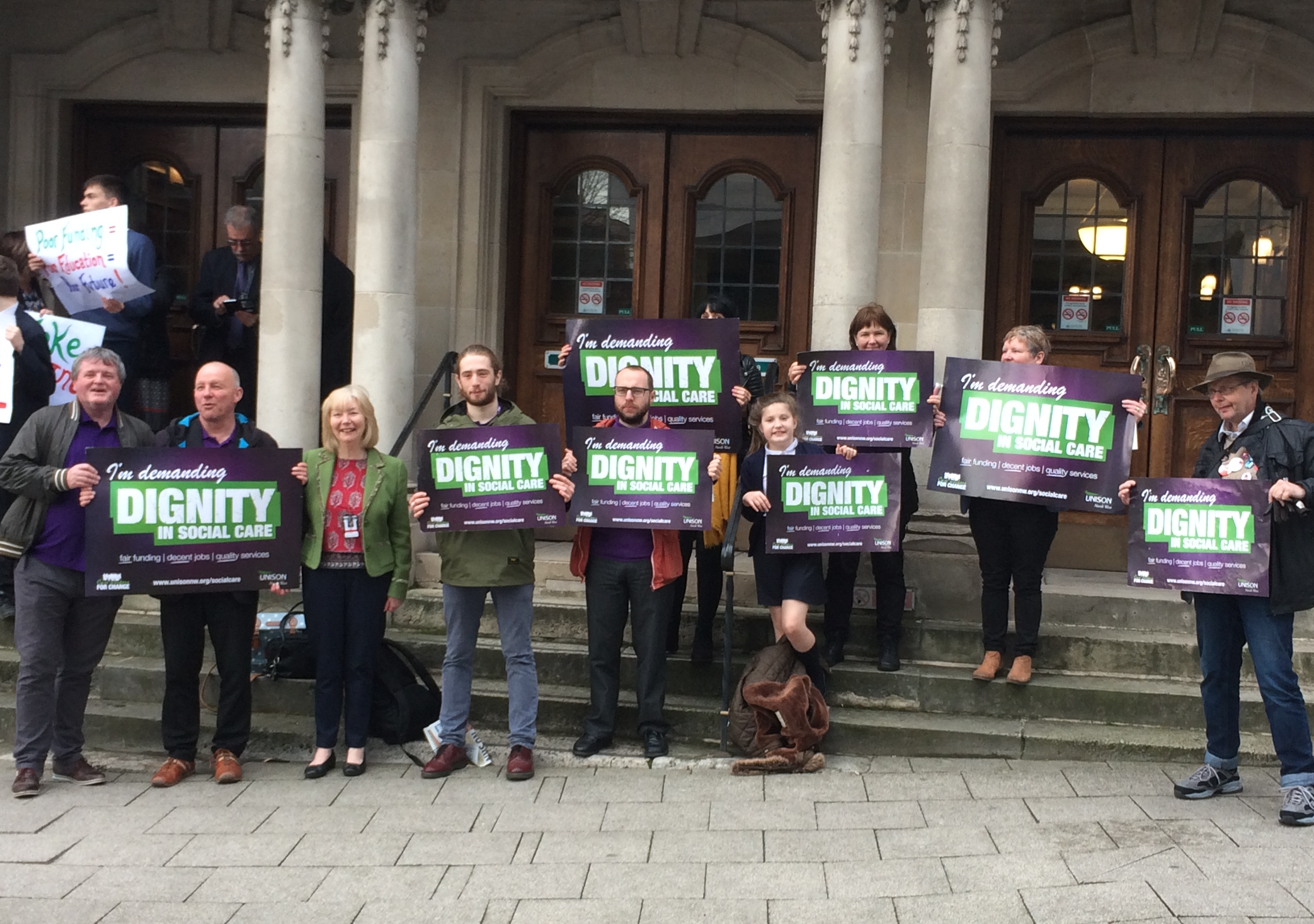 Stockport Council has come under fire for not protecting care workers as UNISON NW has uncovered the shocking treatment of carers who work for Stockport's largest provider of residential care.

Local care workers have told the union that they have been forced into poverty due to the lack of sick pay for staff who need to self-isolate or shield during the ongoing pandemic. Statutory Sick Pay (SSP) is just £95 per week and care workers told UNISON that this is simply not enough money to get by.

The revelations come in the same week that ONS figures showed that care workers are twice as likely to die of COVID-19 than other front-line healthcare workers, sparking questions about whether care workers who do not receive sick pay are putting themselves and vulnerable residents at increased risk by attending work whilst unwell.

2600 care workers, including over 100 in Stockport, have responded to a UNISON North West survey, which reveals the lack of support for care staff during the ongoing public health crisis. 8 out of 10 care workers surveyed believe they will not be paid their normal wages if they have to self-isolate due to COVID-19.

Sharon Brooks works for Borough Care, one of the largest care providers in Stockport. She lost out on over £1000 of wages due to coronavirus related absence. She explained: “I was off for a month with coronavirus symptoms and was tested too late and it came back negative.

"I think its unfair to lose money because I'm sure I contracted it at the home. The virus was present in the home when I contracted it. I received no pay, not even SSP because I tested negative.

"Borough Care don't care about their staff. They aren't looking after staff or residents. They've lost 6 employees in the last 9 weeks because of mistreatment of staff. I'm leaving my job next week because you don't get appreciated."

Several other Borough Care staff members confirmed that they too had lost significant amounts of pay due to suspected COVID-19 cases, but were scared about reprisals from their employer if they were named publicly. One, who lost around £900 said: "A few days after our first resident tested positive, I had a sore throat and decided to self-isolate. I had already been off for 2 weeks self-isolating when I was tested positive.

"After that, my employer told me to stay off for 14 more days but then revised it to a week, meaning I was paid SSP for 3 weeks. My partner also had to self-isolate and in total we had a combined 7 weeks of income only on SSP. I had to apply for a charity grant to get by. I was made to feel as though my original decision to self-isolate was a personal decision."

Another Borough Care worker added: "I am concerned that if you get coronavirus, you don't get paid.

"One of my colleagues tested positive but came back to work early as they are under financial pressure. They were still ill with symptoms and had to go off sick again. Two members of staff who live alone have struggled with bills because they had to go off on SSP."

Another Borough Care staff member says they will leave their job due to their employer's response to the pandemic: "I'm not going in to work because of a long-term health condition- I’m not eligible for shielding but I am very worried about my own health.

"I went off and was told it would be counted as an unexplained absence. I got a sick note for stress, induced by fear of going in. Lack of pay has affected me but I can't go back and will be handing my notice in."

A large majority of the Stockport care workers surveyed by UNISON North West said that their employers were not doing enough to keep them and the people they care for safe.

Manchester City Council and Trafford Council have signed up to the Care Workers vs COVID-19 pledge, which guarantees sick pay for local care workers, and Salford City Council have launched a similar sick pay scheme. Yet Stockport Council has so far refused to sign the pledge and it has come under fire locally, in the form of an open letter signed by 80 local Labour Party members including Navendu Mishra, who has signed the pledge in his own role as an MP.

"The reality is they are twice as likely to die from the virus than other workers. How much of that is because of inadequate PPE or a lack of sick pay that prevents them from self-isolating or shielding when they need to? No-one should have to choose between their own health or hardship.

"Councils across the NW have shown they are able to take action to protect the livelihood of our social care heroes, it's time for Stockport Council to step up and make the same commitments."