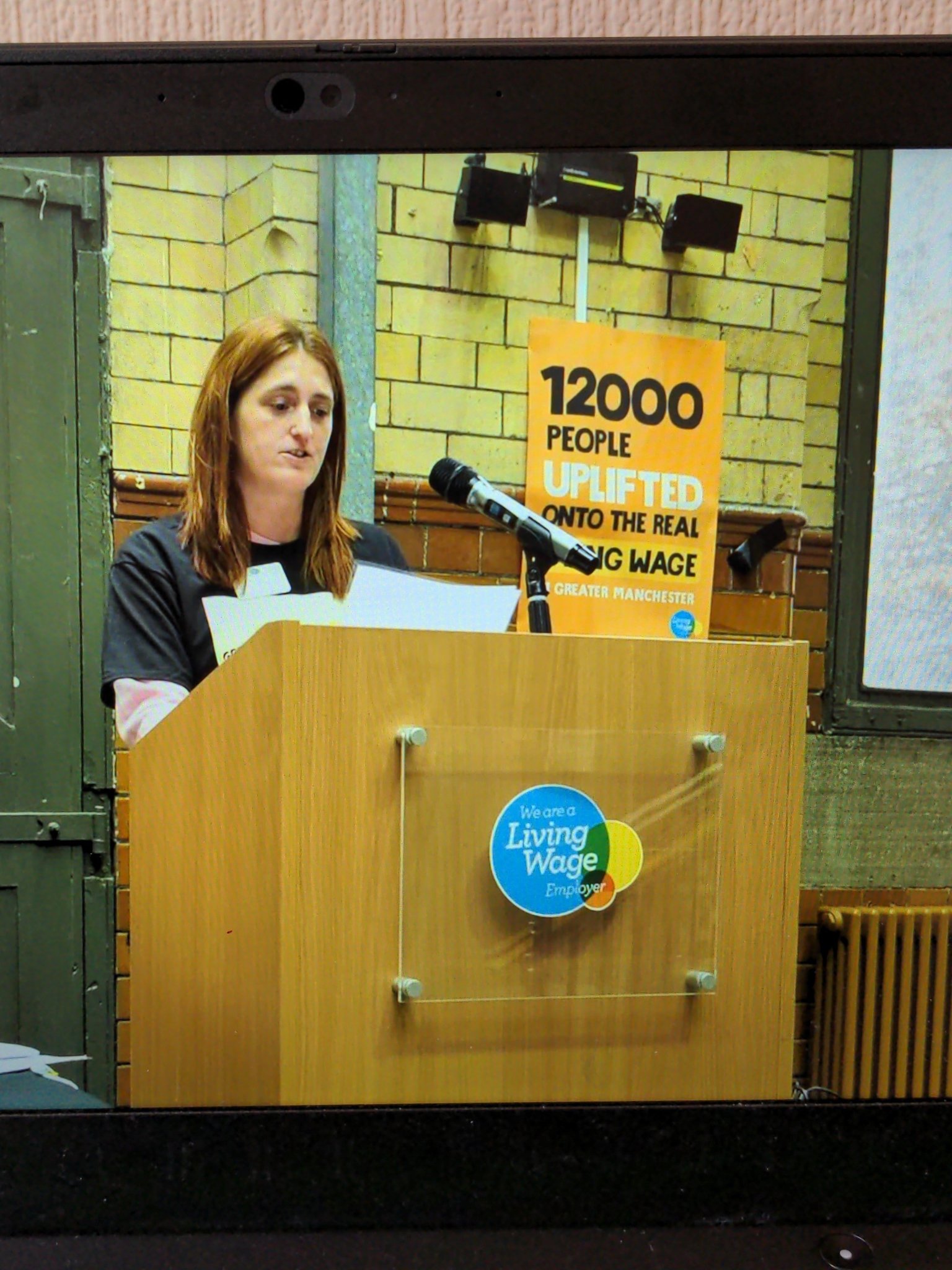 Stockport care worker and UNISON rep Danielle Dolan has this week launched a campaign which demands that all care workers in the region receive a starting salary of at least the Foundation Living Wage (£9.90 per hour).

On Monday, Danielle Dolan made an emotional speech to an audience including Greater Manchester Mayor Andy Burnham during an event organised by the Living Wage Foundation as part of Living Wage Week.

She went on to announce that public service trade union UNISON North West and community organisation Greater Manchester Citizens were launching a joint petition demanding a pay rise for all care workers in the region. The Greater Manchester Care Workers Demand A Pay Rise petition can be found here.

Danielle went on to say: “There is an unprecedented staffing crisis in social care right now- with thousands of unfilled roles. And is it any wonder? I love my job, but the reality for many care workers is that our job is high risk and low reward- characterised by low wages, zero hours, no sick pay and the lives of service users in our hands.”

The petition calls on Greater Manchester’s ten local authorities to require the Foundation Living Wage as a minimum starting salary for all directly employed and commissioned care and support workers.

Speaking after Danielle Dolan at the Living Wage Week event, Mayor Andy Burnham said: “If we choose to prioritise [paying care workers the living wage], it can happen.

“We must call out what is fundamentally unsupportable in any circumstance- that people who are paid to care are not paid enough to live on. If you care as a profession, you should be paid enough to feed your family. That message needs to ring out from Greater Manchester until its heard and until it’s acted upon.

The care worker’s petition received just under 1500 signatures in the first 24 hours since it was published, with care workers from all ten boroughs joining the campaign.

Melissa Thomas, a support worker in Salford said: “I’ve been a support worker for eleven years and have been like many close to leaving due to the lack of pay. There are lots of staff across the UK leaving the care sector due to better paid jobs with less responsibility and less stress.

“Care and support workers need and deserve a significant pay rise, and the Foundation Living Wage is a step in the right direction. We shouldn’t have to struggle to pay bills when we work as hard as we do.”

UNISON North West regional organiser Dan Smith said: “The time for applause, care badges and empty platitudes is over. After working throughout the pandemic, the least our social care workers deserve is a living wage.

“Care workers across Greater Manchester are coming together in their trade union to demand that local councils show leadership. A number of councils in Greater Manchester have demonstrated their commitment to delivering pay rises for care workers – including Rochdale, Salford, Stockport and Bury – but now it’s time for all councils to step up to the mark.

“Together we will build a community coalition, led by care workers themselves, capable of delivering the Foundation Living Wage as a starting salary for every care worker in Greater Manchester.”