OCS staff have the support of colleagues in the hospital. 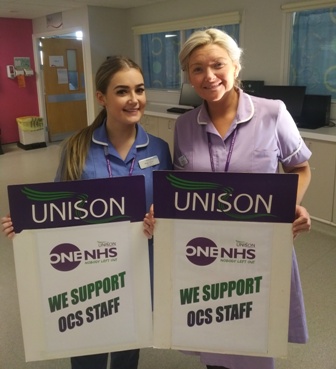 Hospital workers employed by the private company OCS are set to strike on Monday 25 February.

More than 40 staff who work as cleaners, catering staff, porters and security officers at the Liverpool Women’s Hospital plan to join the strike which has been provoked by the refusal of OCS to pay them the NHS rate for the job.

The lowest agreed pay rate for a worker in the NHS is £8.93 per hour, but the OCS staff are paid considerably less than this with some only receiving the minimum legal hourly wage rate of £7.83.  Staff are losing out by up to £2,150 this year alone.

Other staff doing the same jobs at Liverpool Women’s Hospital and at other hospitals are being paid the correct nationally-agreed pay rates for NHS workers.

In the formal ballot organised by UNISON, 100% of staff voted in favour of taking strike action.

A catering assistant at Liverpool Women’s Hospital who would prefer to remain anonymous said:

“We’re struggling to get by on the minimum wage.  I have a colleague working with me, doing the same job, but getting paid more than me.  They don’t like it either and they don’t think it’s fair, so they are supporting us all the way and want us to get the same as them.

“I’ve not been on strike before and I’m a bit nervous but we all think we should be on the right rate of pay.  Everyone feels the same and we’re supporting each other.”

“OCS is a profitable global business and they should pay all their staff at Liverpool Women’s Hospital the NHS rate for the job.

“All OCS staff are performing important roles that affect the quality of care and the patients’ experience of the hospital.  All the staff are part of the NHS team and they should all be paid the agreed NHS rate.

“We raised this matter with OCS seven months ago and there has been no progress in getting it resolved.  OCS staff are very determined that they should be treated fairly and equitably, and their colleagues are supporting them in taking action.”