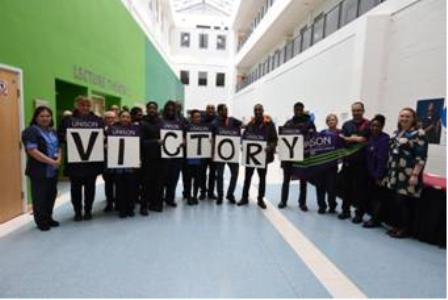 Hospital workers in Wythenshawe who provide key services including cleaning, catering and portering are employed by the private company Sodexo.

Following a successful UNISON campaign back in 2007, Sodexo staff working at the hospital have been paid the proper NHS rates for their jobs.

But Sodexo did not immediately implement the nationally agreed NHS pay rise that was agreed last Summer.

This pay rise is very significant for low-wage workers in the NHS.  The pay deal marked the end of years of pay freezes and pay caps.  It is worth between 6.5% and 25.5% over three years, and means that the lowest paid NHS staff should now have a minimum rate of £8.93 per hour.

UNISON members at Wythenshawe Hospital were preparing to vote on the possibility of taking industrial action to get the NHS rate for the job, but we are delighted to report that Sodexo have agreed to implement the 2018 NHS Pay Framework Agreement in full, with back pay to be granted to April 2018.

“The national pay deal in the NHS recognises that hospital workers have taken a significant hit to their living standards in recent years and that there is a need to ensure that nobody working in our hospitals is on poverty pay.

“The NHS pay rates are the proper rates for the job, and all hospital workers should receive them.

“UNISON members have acted with unity and perseverance in pressing for the pay deal to be implemented.  Sodexo’s decision to pay staff the correct rate for the job is very welcome.  It shows the way for other employers to follow and it will make a big difference to low-wage workers at Wythenshawe Hospital.”