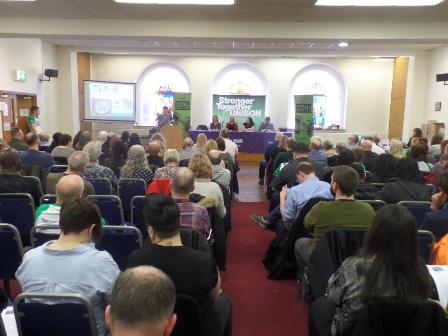 The 4th Annual UNISON North West Organising Convention was held in Manchester over the weekend of 10th March 2018.

The convention was a tremendous success. It brought together UNISON activists with seasoned organisers and campaigners from the UK and overseas to share best practice and develop skills and strategies proven to build real union power.

“It was a brilliant event. Every year we wonder how we are possibly going to match it next year, but every year we manage it. This year’s was the best yet.”

The weekend kicked off on Friday 9th March with a special screening of the Dennis Skinner biographical film “Nature of the Beast”, followed by a Q&A with the film’s co-producer Allan Melia.

There then followed 12 workshop sessions from which each participant could select 3 to attend. Workshop topics included: proven methods to exceed the Industrial Action ballot thresholds, Momentum’s successful organising of young members, securing union recognition within a hostile employer, challenging prejudice in the workplace, and using digital tools to campaign at scale. Each workshop was designed to inspire and equip activists to build even stronger workplace unions. Full details of the workshops running throughout the day can be found in our full programme, which you can download here.

“The annual Skills for Strength Convention is key to our aim of becoming an organising region. Every year we explore successful campaigns and activity from the UK and overseas to develop our own organising skills and strategies. We reflect and adapt and use what we’ve learnt to build stronger workplace unions here in the North West. It’s a great day for anyone interested in building real union power”.

UNISON North West would again like to thank all the speakers and staff who work so hard to deliver the event, all those members who give up their precious time at the weekend to attend, and Thompsons Solicitors for their sponsorship of the event