Save the NHS Bursary - Get Involved 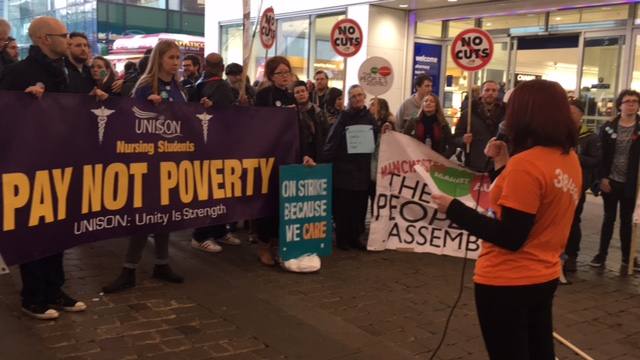 Student nurses, midwives and other NHS professional attended marches and rallies last weekend in support of the NHS bursary in London, Newcastle and Manchester.

NHS students and their supporters, including UNISON members, held a rally on Market Street in Manchester on Saturday, before joining junior doctors at a large demonstration in Piccadilly Gardens. Rallies were also held in Newcastle London

The government plans, part of the Chancellor George Osborne’s autumn spending review, will see nurses and other health professional graduate with a debt of at least £51,600.

They will pay the entire bill for their training, even though nurses spend 50% of their training time working for the NHS on clinical placements, and their starting salary is £22,799.

You can get involved in the campaign today and help us stop the Government from scrapping the NHS bursary scheme: