A campaign by Salford care workers and members of trade union UNISON has won a massive £19m pay rise for social care workers around the country. 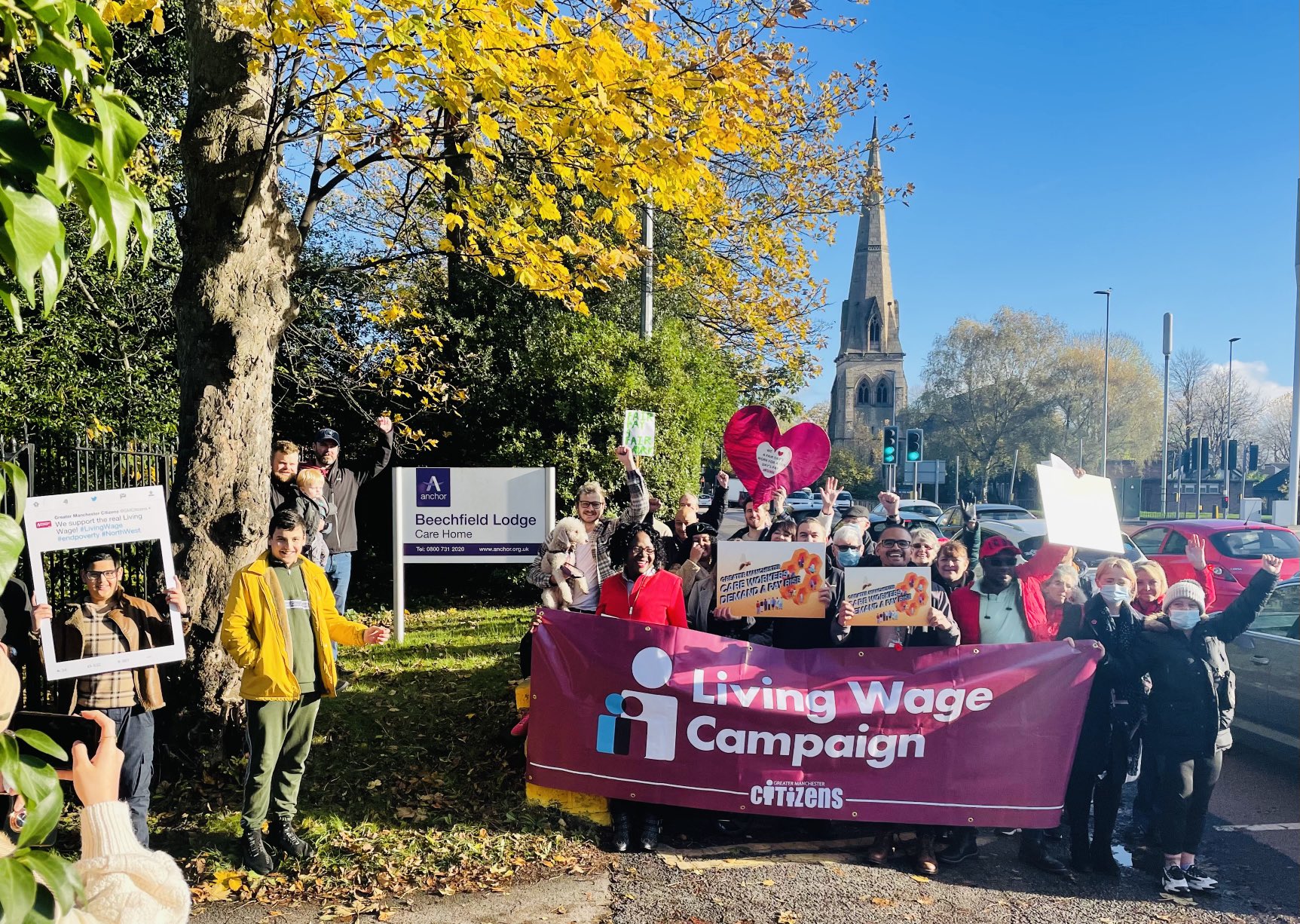 Salford City UNISON has been campaigning for several years to ensure that care workers employed by Anchor Hanover- the largest provider of specialist housing and care for older people in England- are paid at least the real Living Wage. The real Living Wage (currently £9.90) is independently calculated by the Living Wage Foundation as the hourly rate of pay required for a decent standard of living. Anchor care workers are currently paid the national minimum wage of £8.91 (or lower if they are younger than 23 years old).

Anchor Hanover was one of the few social care providers operating in Salford which refused to pass the funding on to its care workers, despite it costing them nothing. In response, Salford City UNISON organised a protest outside one of Anchor’s local care homes and launched a petition.

Since then, care workers employed by Anchor Hanover have signed a letter to Salford City Council, which asked the council to step in and ensure that Anchor passed on the available funding and gave its care workers a pay rise.

The union’s campaign culminated in a community action which took place last month during Living Wage Week outside an Anchor home in Salford. The action, supported by Greater Manchester Citizens, was attended by care workers, councillors, local MP Rebecca-Long Bailey and community supporters from mosques, food banks and churches. At the event, care workers spoke about how difficult it was to get by on the minimum wage- with one care worker revealing that she had sold her car to make ends meet.

As a result of this action, the Managing Director of Anchor Hanover contacted Salford City UNISON branch directly to let them know that all care workers employed by Anchor in the country will be paid at least the real Living Wage of £9.90 per hour from this month (December) onwards. This huge uplift will cost Anchor £19m per year.

One Salford care worker employed by Anchor Hanover expressed relief about the pay rise. They said: “This will help me pay my bills because prices have gone up so much. Hopefully it will help me go on holiday and enjoy life.”

“Through a combination of organising with workers, relentless direct protest and determined political lobbying, we have shown that those who deliver care and support can have a powerful voice.

“Care workers are usually presented as victims of forces they cannot control and we know it can feel that way for many. However, in UNISON we are determined to show that care and support workers have power and that when they come together, they are a tremendous force that must be listened to.

“This success is only the start. We want all care and support workers to know that when they come together as trade union members they can get what they deserve and we want employers to know that UNISON will keep organising and campaigning until justice is done.”

UNISON North West recently launched a campaign for all care workers in Greater Manchester to be paid at least the real Living Wage. The campaign petition calls on Greater Manchester’s ten local authorities to require the Foundation Living Wage as a minimum starting salary for all directly employed and commissioned care and support workers.

“After coming together in their trade union, workers at Anchor Hanover have won the real Living Wage. It shows what can be achieved when workers stand together, and it demonstrates that employers are able to pay decent wages to staff.

“UNISON North West and care workers across the region call on care providers to follow suit - care workers demand a pay rise. We also call on local councils to take responsibility for the pay and conditions of social care workers by making the Foundation Living Wage the minimum starting salary for all commissioned social care.”

The Greater Manchester Care Workers Demand A Pay Rise petition- which has received over 3000 signatures so far- can be found here.