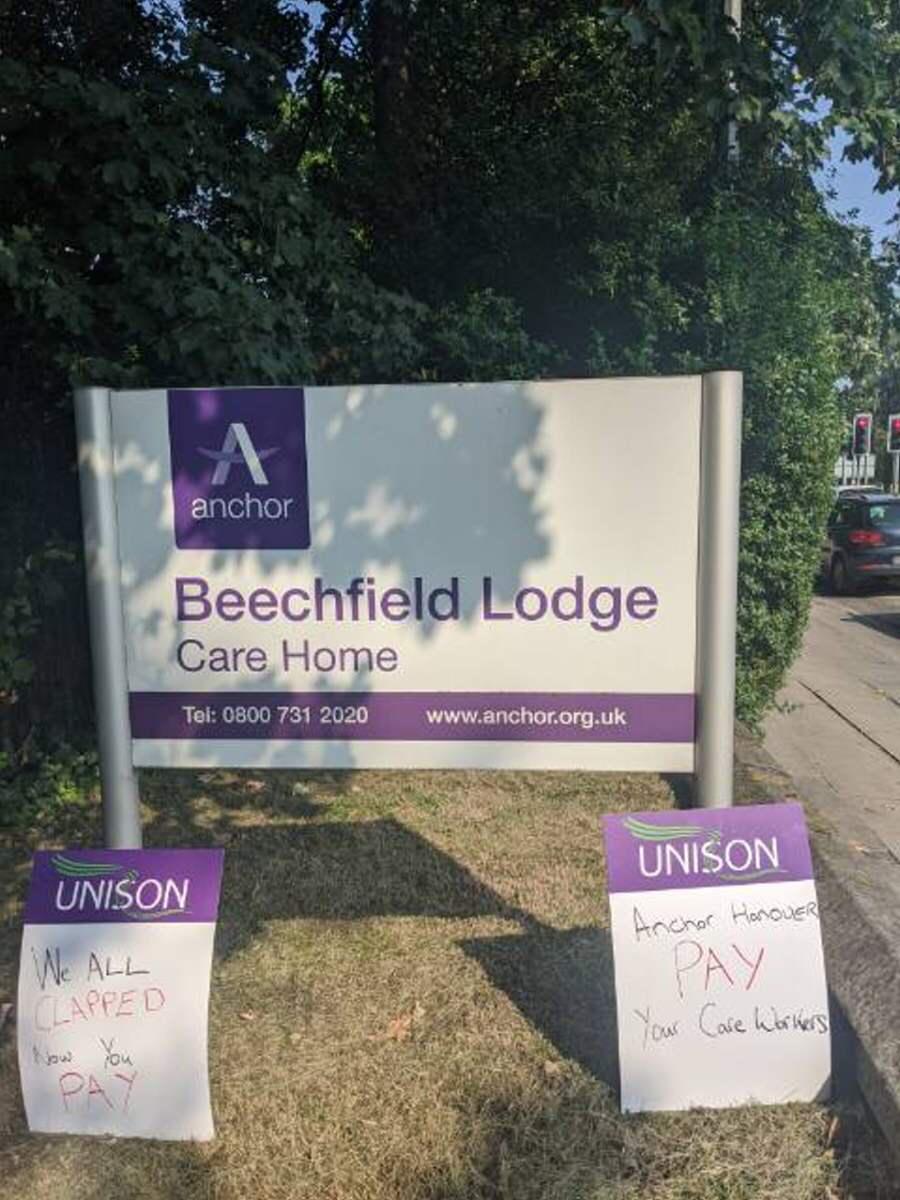 Many care organisations operating in Salford are still refusing to support care workers who need to self-isolate or shield due to COVID-19. This is in spite of the local council and NHS Trust working together to provide ‘The Salford Offer’- a package of funding specifically for care providers to ensure care workers receive full normal pay for COVID-related absence.

As Salford remains under increased local lockdown restrictions, this has sparked unease amongst local politicians, who showed their support for local care workers at yesterday’s demonstration outside the Anchor Homes run care home. There is significant concern that care workers may still attend work when symptomatic due to the financial detriment they would suffer if they self-isolate.

A number of carers who work for companies operating in the city have shared their stories. Laura (name changed to protect identity), a care worker who works for national chain HC-One, feels “let down” by her employer.

Laura, who has been a care worker for five years, was forced to take a week off work in March after she began to exhibit symptoms of coronavirus. Laura received no sick pay for this period of absence.

The care home Laura works in was one of the hardest homes in the city during the early months of the pandemic. When Laura returned to work, physically and mentally drained by the effects of the virus, she worked extra shifts every week as the virus raged through the care home, afflicting both staff and residents.

During that period, twenty residents of the home died as a result of COVID-19. The care home’s maximum number of residents is sixty, and Laura struggled with the devastating impact of the pandemic on her care home’s residents.

“It was heartbreaking”, Laura says: “I’ve worked in this home for two and a half years and you build up relationships with the residents. We’re all doing our best to provide care but it’s so hard watching the residents go through this, especially when their families couldn’t visit them.”

A few months later, shattered by the longer hours and emotional trauma, Laura was signed off work due to mental health struggles. During her period of absence, Laura initially received no sick pay at all, before eventually receiving a combination of Statutory Sick Pay (SSP) and pay for annual leave, which she was forced to take.

Laura says she felt “let down” by her employer, having had to fight to receive any sick pay throughout her two COVID-related absences. She says that it was “tough to get by on SSP or less, I ended up relying on my boyfriend and would have really struggled financially if I’d have been on my own”.

Having been forced to take annual leave, the idea of returning to the intense pressure of working in a care home during the pandemic without much annual leave left for the rest of the year was overwhelming.

Laura has now returned to work but now feels she “can’t trust” her employer anymore and has decided to leave her job even though she “loves the residents”. She hopes to continue working in care but is upset by the experience she has had.

Laura says she “felt angry” when she realised that HC-One could have paid her full normal sick pay throughout the pandemic without incurring any cost if they had simply applied ‘The Salford Offer’. “It just feels wrong that I have gone through so much trouble to get sick pay over the last few months when HC-One wouldn’t have had to pay a penny to give us all full sick pay while we were off.”

Angela (name changed to protect identity) is a care worker for Comfort Call in Salford. Angela’s daughter has been diagnosed with breast cancer and has therefore been categorised as “extremely vulnerable” within the Government’s coronavirus guidance.

Angela has not worked since April as she felt could not take the risk of bringing COVID-19 into her home and putting her daughter’s health in serious jeopardy. Angela has provided evidence of her daughter’s health condition to Comfort Call but has only received SSP from her employer. She has lost out on thousands of pounds and has struggled to make ends meet.

Several of the care companies that are not implementing the offer are some of the largest care providers in the country, with HC-One, Comfort Call and Anchor Hanover all dragging their feet. Salford City UNISON have launched a petition which is addressed to all care companies refusing pay full sick pay in the city.

Salford City UNISON branch secretary Steve North said: “Care workers throughout our city were delighted when their determined campaigning resulted in the comprehensive package of support being introduced as ‘The Salford Offer’. No more would they have to choose between health and hardship, between protecting their service users and providing for their families.

“And yet despite the fact that it would cost them nothing to protect their own employees, many of the largest care providers in Salford have simply refused to implement the offer. This is not just an insult to the care workers who have put their own lives at risk during this pandemic; it also puts every resident of Salford at risk by potentially increasing the rate of coronavirus transmission in our city.

“This is an example of a local authority and the NHS trying to do all they can to protect care workers and service users and yet the biggest obstacle to this is the care companies themselves. If care companies refuse to adhere to the standards set by those who pay for them, I would strongly recommend that our political representatives bring our care services back in-house, for the benefit of local people rather than care company directors.”