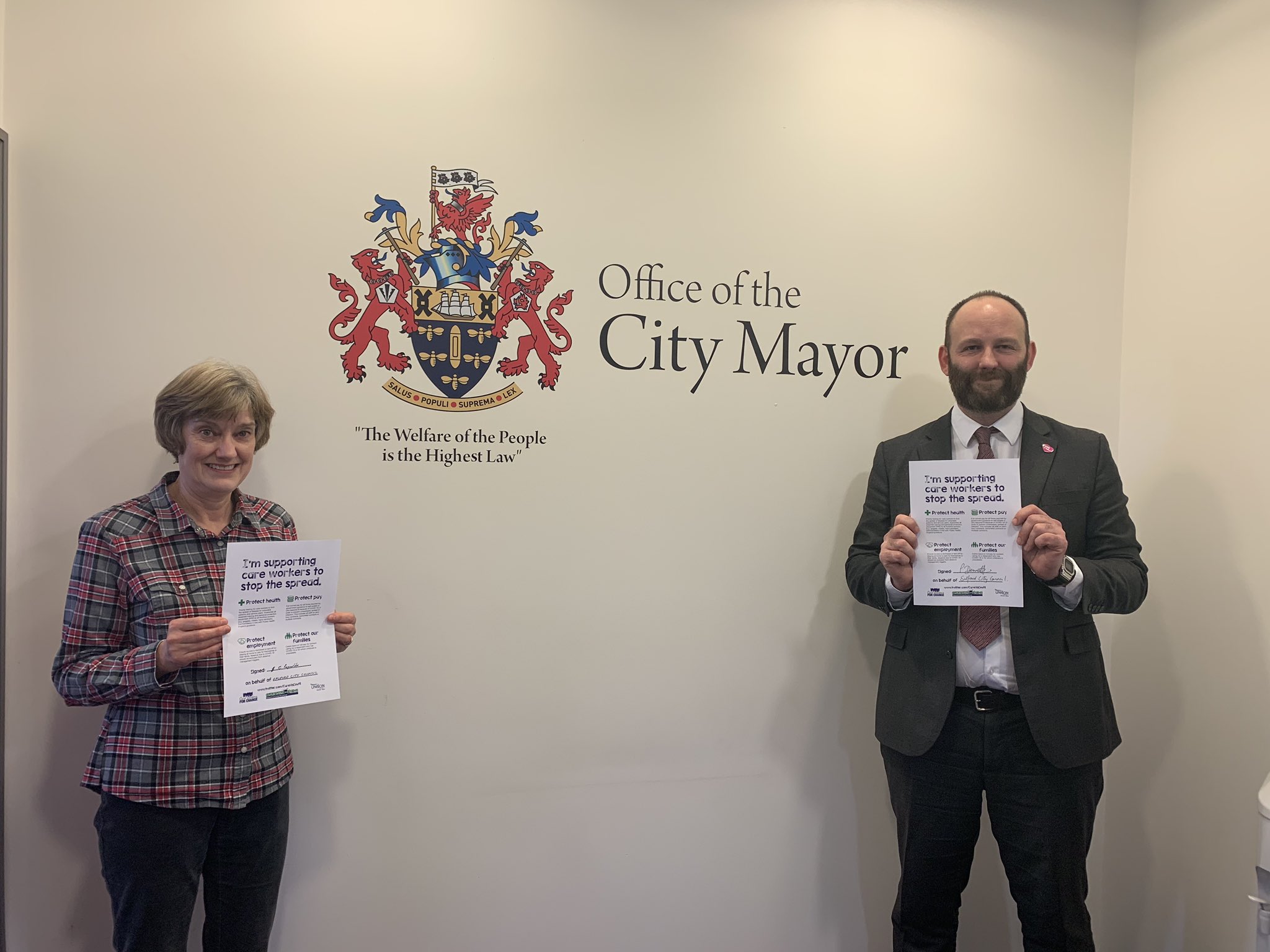 Salford’s care workers, politicians and trade union UNISON have voiced their dismay after they discovered that many care companies operating in the city are still refusing to support care workers who need to self-isolate or shield due to COVID-19.

Public service union UNISON had previously commended Salford City Council for launching a “trailblazing” package of protections for care workers which it said was the “gold-standard” for councils in the North West. ‘The Salford Offer’ aimed to protect local care workers and the people they care for during the ongoing pandemic, by providing financial support to care providers in exchange for guarantees that they will make commitments designed to stop the spread of coronavirus in Salford. Most crucially, ‘The Salford Offer’ guarantees full pay to care workers who have to self-isolate due to COVID-19.

But it has now emerged that numerous care companies are refusing to implement ‘The Salford Offer’, even though any additional costs are being funded by the NHS and local authority. Several of the care companies which are not implementing the offer are some of the largest care providers in the country, with HC-One, Creative Support and Anchor Hanover all dragging their feet.

ONS figures have also shown that care workers are twice as likely to die of COVID-19 than other front-line healthcare workers, sparking questions about whether care workers who do not receive sick pay are putting themselves and vulnerable residents at increased risk by attending work whilst unwell. ‘The Salford Offer’ was designed to stop the spread of coronavirus and the failure to implement it has sparked significant concern amongst politicians and trade union officials.

A Creative Support care worker who did not want to be named said: ‘’I was off for 2 weeks and was only paid Statutory Sick Pay (SSP). We're in the middle of a global pandemic. They should forget about how many days you've had off and focus on what's important; staff and service users not dying.

“We’re on minimum wage and for what we have to do, it isn't worth it but we do it because we care about the people we look after. I know it sounds like an exaggeration but we do risk our lives every day at the moment and get zero thanks or appreciation for it. They can't even apply for funding so we can have time off if we're displaying COVID symptoms and I find it absolutely shocking and disgusting.

I personally knew one staff member and one service user who died due to coronavirus.’’

An HC-One care worker who did not want to be named said: “I had to take a week off because I was showing symptoms of the virus. Instead of giving me full pay, HC-One said I could choose between SSP and annual leave.

“I can't afford to lose a week’s pay, I have too many bills. If I only have £94 for the week, it would be very hard for me. Instead I had to sacrifice my annual leave and miss out on precious holidays with my little girl, because I was ill. It's unfair but I had no choice.’’

A Laburnum Court care worker who did not want to be named said: “I was tested positive for COVID-19. I knew about the ‘’Salford Offer’’ at the time and was told, ‘’we don’t do that here’’.

“I have been in care for many years and I have never felt so undervalued, unappreciated and worthless.”

A second HC-One care worker who did not want to be named said: “I have been off work due to the effect COVID-19 has had on my mental health. I have lost a lot of people that I had built a close bond with, which was really hard and I have been struggling to cope with the loss of them.

“I am feeling like I have had no support from my workplace as I have been on SSP of £95 a week and have been forced to use two weeks of annual leave. I feel like my workplace hasn't supported me- they have made me feel worthless.”

Salford City UNISON branch secretary Steve North said: “Care workers throughout our city were delighted when their determined campaigning resulted in the comprehensive package of support being introduced as ‘The Salford Offer’. No more would they have to choose between health and hardship, between protecting their service users and providing for their families.

“And yet despite the fact that it would cost them nothing to protect their own employees, many of the largest care providers in Salford have simply refused to implement the offer. This is not just an insult to the care workers who have put their own lives at risk during this pandemic; it also puts every resident of Salford at risk by potentially increasing the rate of coronavirus transmission in our city.

“This is an example of a local authority and the NHS trying to do all they can to protect care workers and service users and yet the biggest obstacle to this is the care companies themselves. If care companies refuse to adhere to the standards set by those who pay for them, I would strongly recommend that our political representatives bring our care services back in-house, for the benefit of local people rather than care company directors.”

Salford City Mayor Paul Dennett said: “A lot of hard work and public resources have been put into developing the Salford Offer for care workers in the City of Salford, working with our trade unions and partners across the city’s health and social care system because we fundamentally believe it is the right thing to do, not only to support care workers themselves, but also their families, service users and our wider community.

Whilst we appreciate that some providers have reviewed their position recently and agreed to implement the Salford Offer, which is good news, we remain concerned to hear that other providers in the city are still considering or have already taken the decision not to implement the Salford Offer. We support UNISON in their efforts to secure the support Salford’s care workers rightly deserve, especially as we continue to work together to tackle the COVID-19 pandemic in the city and we will doing all we can as a commissioner to resolve this matter.

For many years now social care in England has been chronically underfunded, with many care workers being subject to poverty pay and poor employment standards, driven by years of cuts to local government budgets, privatisation and an incremental drift to commissioning services rather than directly delivering social care through the public sector.

During the COVID-19 pandemic we’ve sought to prioritise the health, safety and wellbeing of our care workers, their families, service users and the wider community through the Salford Offer and I sincerely hope that all providers engage with this important initiative in the interest of everyone’s welfare in our city.”