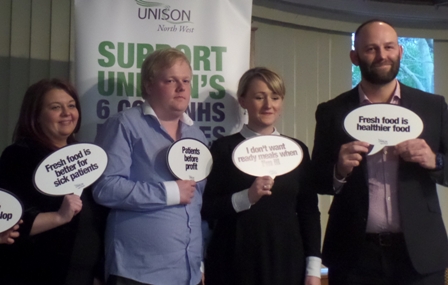 All eyes will be on the Salford Royal Trust Board meeting on Monday morning as directors discuss the future of patient catering.

The Trust’s controversial plan to replace fresh food prepared on site with factory-produced ready meals has caused widespread concern amongst the public and staff.  Nearly 1,500 people have signed the ‘Stop the Slop’ campaign’s petition calling for the Trust to halt its privatisation plan.  Amongst the campaign’s supporters are local MP Rebecca Long-Bailey, mayoral candidate Paul Dennett and a number of experts on diet and health.  The Trust is planning to enter into a contract with a private company to provide cook-chill or cook-freeze meals on 16 May.

“This is an important and urgent issue and I have written to the members of the Trust board to highlight the significant concerns about this proposed change.  The privatisation plan would worsen the quality of food served to patients at Salford Royal.

“If the Trust plough ahead with the current plan it will be difficult for them to reverse it once the on-site kitchens are closed.  The Trust Board need to act now to halt this unpopular and damaging plan.”

The letter sent by UNISON to Trust Chief Executive Sir David Dalton and members of the Trust Board highlights concerns about the privatisation plan.  The letter can be viewed here: http://www.unisonnw.org/stoptheslop