Pay has to be Top of the Agenda 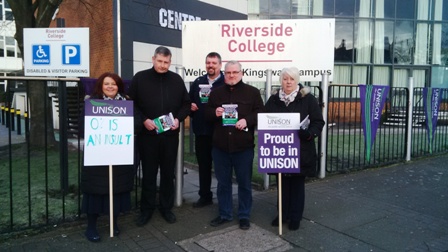 On Wednesday, UNISON members in further education took industrial action on pay.  After receiving a zero per cent pay ‘offer’, members showed that they are not prepared to see their living standards and the FE sector be decimated by year after year of cuts.  It was a great day and I was pleased to be able to meet with pickets at my local college and then join the regional rally in Manchester.  This week we also had news that UNISON NJC members have rejected the LGA’s pay offer.  Pay is always a central issue for our members and our union – and I think that has to be right.

It was timely that UNISON North West hosted a seminar on pay on Thursday.  Wages are not working as a means of distributing resources fairly and ensuring decent living standards, and we had a range of excellent speakers who had different perspectives on the problem and what can be done about it.

We welcomed Tom Skinner from the Greater Manchester Living Wage Campaign, who described the progress being made in persuading and cajoling low-paying employers to increase their rates of pay.  We heard from Pete Challis about how the Government is planning to slash in-work benefits through the roll-out of universal credit.  Ken Mulkearn from IDR presented data showing how the ‘public-private pay gap’ was always a dubious concept and that after years of austerity there is now no pay premium in the public sector.  John Hendy QC talked about developing sectoral collective bargaining which would be transformational for the lives of millions of working people – and through ending the practice of employers being able to hire cheaper workers could provide a non-racist solution to the migrant crisis.  Collective bargaining requires a credible threat of strike action – without that it is collective begging – and Lynne Collins from NWTUC provided a timely update on the dangers of the trade union bill and the progress being made in the campaign against it.

The speakers’ contributions were all excellent and provided us with a lot to think about.  In the coming months, members’ pay – and the wider problem of income injustice – will be absolutely central to our union’s work.