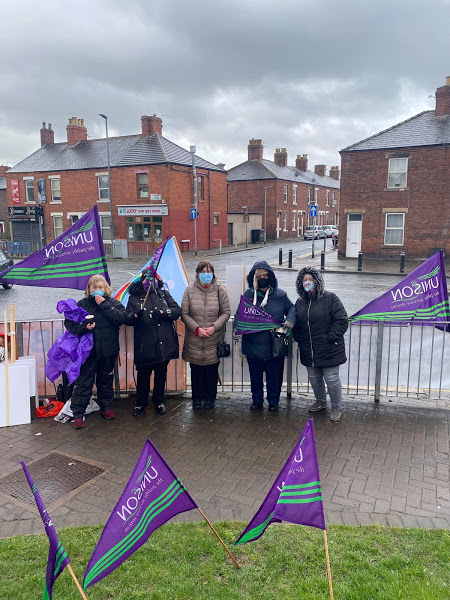 A pay dispute at strike-hit Cumberland Infirmary has taken an ugly turn for the worse.

Whilst hospital workers are planning to begin a second 48-hour strike on Friday (26 March), a new row has erupted over the way hospital domestics say they’re being punished for joining the picket lines.

The domestics were among 150 frontline staff employed by private contractor Mitie who took two days of strike action in February and March over missing wages.

They earn less than NHS workers doing the same jobs because they don’t receive enhancements for working unsocial hours such as nights and weekends.

This is despite North Cumbria Integrated Care NHS Trust saying it handed over a “substantial sum” to cover these payments when the services were privatised in 2010.

Since taking strike action, hospital domestics have reported being targeted by being put on different duties, being refused holidays and denied overtime.

The workers have also been threatened with disciplinary action if they speak out publicly about issues within the company.

The company is already at the centre of a scandal over why money meant for unsocial hours payments hasn’t reached the hospital workers for ten years.

Now the strikers want to know what NHS Trust bosses intend to do to resolve the dispute. They are demanding answers when the Trust Board meets tomorrow (25 March), the day before a further 48-hour strike is due to take place.

UNISON Regional Organiser David Atkinson said: “Mitie has admitted there was an agreement that these workers should have been paid unsocial hours payments so they should be pulling out all the stops to ensure these payments are made going forward.

“Instead, hospital workers feel that they have treated unfavourably by Mitie since returning to work after taking strike action. Mitie bosses should focus their energy on resolving the dispute rather than further punishing low paid workers.

“Mitie says talks at a senior level are “making headway” but all they need to do to halt the strike is give a written commitment that unsocial hours payments will be implemented within a reasonable timeframe.

“Without that, the strikes will continue and will be escalated.”

Councillor Stewart Young, Labour Leader of Cumbria County Council said: “It is deeply concerning that a substantial amount of taxpayers money, handed over 10 years ago, has not made it into the wage packets of these workers, who are a vital component of the hospital’s operation, which they have demonstrated throughout this pandemic.

“I join with UNISON and the GMB in calling on these three organisations to resolve their contractual issues, to explain to local taxpayers where the substantial sum of money is, which should be in the local economy, and for equitable treatment for all staff working unsocial hours at the Cumberland Infirmary.”