"If Arriva cannot be trusted to run the service why should the public have faith in any other private company?" 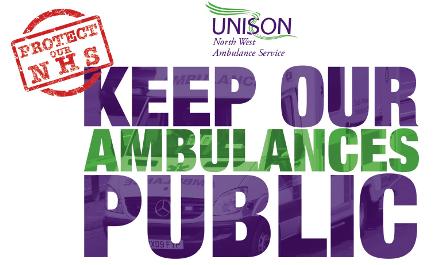 In Greater Manchester the Patient Transport Service is currently run by the private company Arriva after a controversial decision to outsource it in 2013.

A decision will be made in December about who will run Patient Transport Services across the North West.

Today, Arriva announced that it is withdrawing its bid after admitting to "overstating performance standards" in Greater Manchester.

“The public will be outraged that a private company has been making a profit out of the NHS by presenting false statistics.  Arriva sought to brush-off concerns from the public about the quality of the service they were providing, but it is clear now that those concerns were well-placed.

“This is a failing of a system that rewards private companies for exaggerating their performance.  To be clear, the workers who provide the Patient Transport Service are blameless in this matter, and our members will continue to strive to do the best they can for patients in spite of the failings of Arriva.

“The commissioners who are currently deciding who should provide the Patient Transport Service in future must take note of what Arriva have done.  There is a bid on the table from the NHS North West Ambulance Service and we call on the commissioners to award them the contract.  If Arriva cannot be trusted to run the service why should the public have faith in any other private company?  We don’t want private companies running our public services to make a profit - we want an NHS we can trust.”