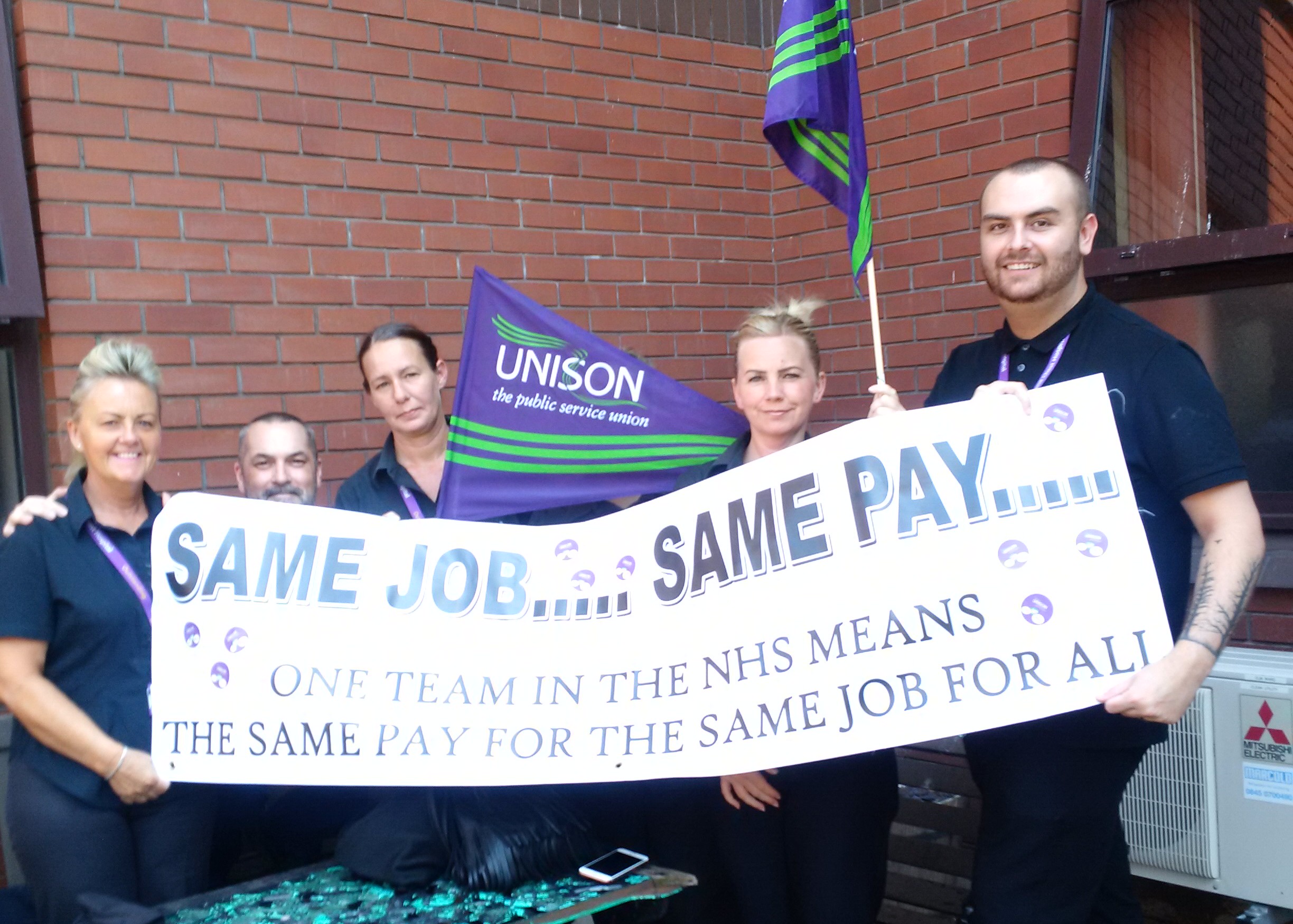 Staff employed by private contractor Compass within St Helens and Knowsley, Blackpool and Liverpool Heart and Chest NHS Trusts have unanimously voted to take strike action at the end of the month over their employer’s failure to match NHS pay rates.

The staff work for the multinational outsourcing company as catering, cleaning, security, portering and reception staff and most are paid only the minimum wage rate of £8.21 an hour.

But Compass staff work alongside colleagues who are employed directly by the NHS, where the lowest rate is £9.03 an hour. This difference of 82p an hour is worth £1,600 a year for full-time staff.

After Compass refused to give its staff a wage rise in line with that paid to NHS employees last year, UNISON asked almost 300 members whether they wished to go on strike over the issue. The result was that 100% of respondents voted to take industrial action.

A one day strike will take place within all three NHS trusts on Wednesday 31 July if ongoing talks between UNISON and Compass are not able to reach a successful conclusion.

Commenting on the vote, Donovan Rowe, a porter employed by Compass at St Helens Hospital said: “It’s disheartening to work alongside colleagues doing the same job who are getting paid more than you.

“It’s affecting staff morale and creating a divide between staff on NHS contracts and the rest of us. We do the same jobs and it’s only right that we get the same pay.

“I’m working weekend and night shifts, but unlike my NHS colleagues don’t earn any extra for doing these. At times I’ve worked 45 hours overtime a month just to get by. If we got the pay rise, I would be able to work my contracted hours every week and have more time to spend with my family.”

Michelle Tymon is a UNISON representative who also works for Compass but gets the higher NHS rate for the job. She said: “I am fully supportive of my striking colleagues.

“We all do exactly the same work and yet those of us lucky to be on NHS contracts earn thousands of pounds more per year. We all play our part in keeping the health service going and it’s only right we all receive proper NHS pay and conditions."

UNISON North West regional organiser Lisa Walsh said: “It’s completely wrong that staff working side by side together within the NHS are getting different rates for the job.

“On top of the issue of hourly pay, those on Agenda for Change (NHS) contracts are receiving shift bonuses and better sick pay schemes.

“All of these workers deserve an NHS contract for an NHS job – it’s time for the two tier workforce to end.

“The 100% mandate for strike action shows how strongly these dedicated hospital staff feel about this issue.

“Compass made £1.7bn in profit last year. They should put their hands into their deep pockets and find the 82p per hour that would make little difference to their profits but would be a huge help to NHS workers in St Helens, Blackpool and Liverpool.”