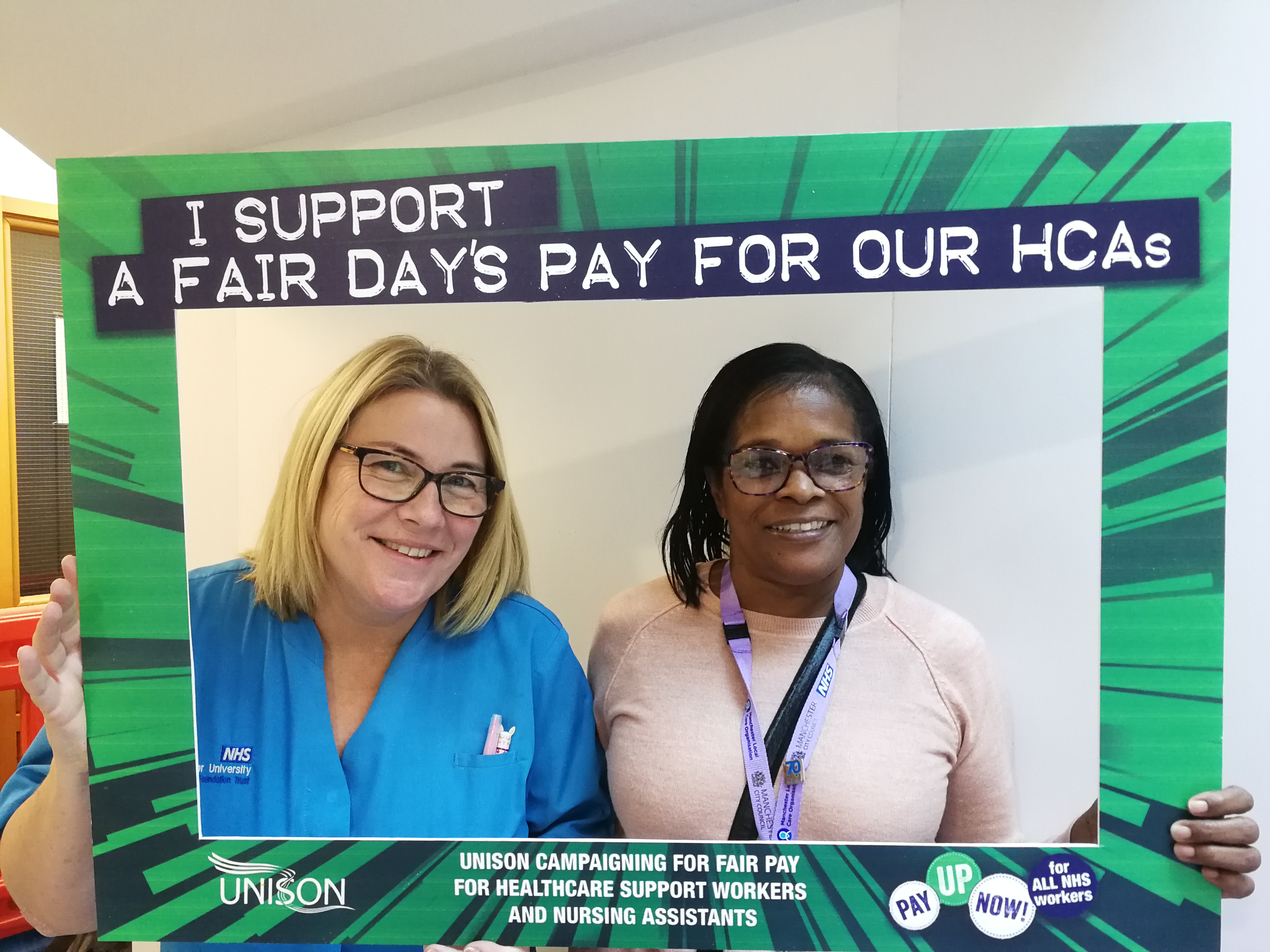 The health workers- who are employed by Manchester University NHS Foundation Trust (MUNFT)*- have received support for their campaign from MPs, their trade union UNISON and their fellow NHS workers.

But a survey of four hundred Band 2 support staff within the MUNF Trust found that the overwhelming majority of staff were regularly and routinely undertaking clinical duties above their pay grade. Whilst a Freedom of Information request by UNISON found that 75% of HCAs, NAs and MAs employed by the Trust are Band 2s- this is significantly higher than the 55% average across Trusts in the North West.

The health workers- many of which have lost out on thousands of pounds in pay- have previously raised the issue of incorrect banding with MUNFT and have now submitted a collective grievance after becoming frustrated with the lack of action. The support staff believe that the Trust should recognise their years of going over and above to deliver exceptional patient care.

The hospital workers have received widespread support. Almost four hundred of their MUNFT colleagues- including nurses, midwives, doctors, consultants and matrons- completed a UNISON survey which found that 91% of staff felt that patient care would suffer if Band 2 staff did not undertake duties beyond personal care. A petition in support of the NHS staff has also been signed by over two thousand patients, staff and politicians.

A member of the Maternity Assistant Team at St Mary’s Hospital said: “We have several nursing assistants within our nursing team who often have to deal with upset or angry patients, perform venepuncture and break bad news. Another part of our daily job role requires us to work in a surgical theatre setting where we carry a catheter containing a viable embryo from point A to B. You are potentially carrying somebody’s chance of a family- this level of responsibility is more than a Band 2 nursing assistant should have.

“Some of our Band 2 staff sacrifice family time and days off in order to pick up extra shifts just to make ends meet. Some also claim benefits to top up their wages- this has an impact not just on our mental health but also on the mental health of our families.”

A Health Care Assistant who works in Wythenshawe said: “As Band 2s we do it all- ECG's, venepunctures and more because we care and want to help. This has been going on for many years and so it has become part of our job.

“The managers often think that doing the clinical duties is part of our role. It would be nice to be rewarded and feel more valued by being on the correct banding and paid correctly.”

Kate Green, MP for Stretford and Urmston said: “Healthcare assistants do a vitally important job. COVID has starkly reminded us all how much we rely on the care, compassion and professionalism of our health key workers

“They deserve proper recognition and reward for the demanding and important roles they undertake.”

“Support staff have gone above and beyond during the COVID-19 crisis – but the way they are being treated by the Trust is an absolute disgrace.

“Healthcare Assistants, Nursing Assistants and Maternity Assistants are undertaking necessary clinical work but without the appropriate pay, reward and recognition. If they didn’t perform these essential clinical duties, they would need to be completed by nurses and doctors who are already overworked and understaffed.

“The Trust is getting clinical care on the cheap by taking advantage of the goodwill of staff, but it can’t go on any longer. We have clapped them during the pandemic – now the Trust need to step up and pay our healthcare heroes what they deserve.”