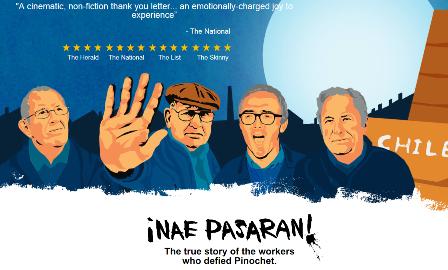 ‘Nae Pasaran!: the true story of the workers who defied Pinochet’ will be screening in Manchester on the 10th September. This will be the first public screening in England, a day before the 45th anniversary of the 1973 coup in Chile.

With unprecedented access and research, NAE PASARAN reveals for the first time the incredible impact made by Scottish factory workers 40 years ago against one of the most repressive dictatorships of the 20th century. 40 years after their defiant stand in protest against Pinochet's Air Force in Chile, Scottish pensioners discover the dramatic consequences of their solidarity. For more information and to view the trailer please visit: https://naepasaran.com/

The event is being supported by UNISON, Unite, NUJ, Creative Scotland and Amnesty UK.

Tickets are £1 with all monies being donated to Refugee Action.