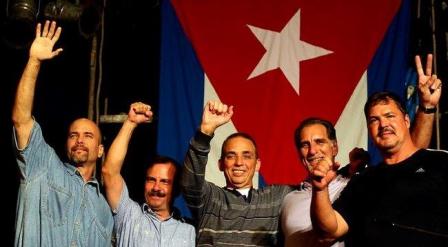 Thursday 14 July, 6.30pm at Manchester Town Hall.  Hear first hand from René and Gerardo who spent 16 years in US jails for trying to stop terrorist attacks against Cuba.

Gerardo Hernández and René Gonzalez are visiting the UK to thank campaigners for their solidarity and support through 16 years in American prisons.  Gerardo and René are two of the Miami Five who received very harsh and unjust jail sentences after infiltrating Florida-based groups responsible for violent actions and bombing campaigns against Cuba.

They will be speaking at a public meeting about their time in jail, how international solidarity helped them, the current situation with US-Cuba relations, and why solidarity with Cuba is just as important as ever while the US blockade remains in place.

They will be joined at the meeting by speakers including Interim Mayor of Greater Manchester Tony Lloyd, Angela Rayner MP, Bob Oram from the Cuba Solidarity Campaign and UNISON North West Regional Convenor Paula Barker.

It promises to be an informative and inspiring event and there's no need to book.

There is a flyer for the event available here.