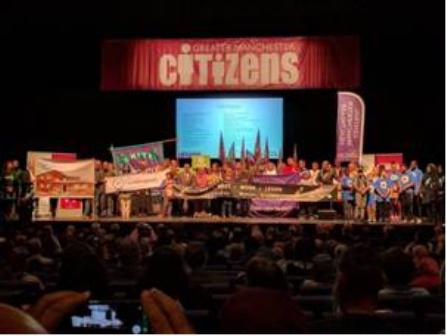 Greater Manchester Citizens held its Assembly on Monday 1 May at the Lowry Theatre in Salford.    One thousand people were in attendance, including the mayoral candidates from the three biggest national political parties: Andy Burnham (Labour), Sean Anstee (Conservative) and Jane Brophy (Lib Dem).  The candidates heard powerful testimonies and responded positively to ‘asks’ about key issues in the city-region including care, the real living wage, hate-crime and housing.

Members of UNISON employed in social care and health spoke passionately about their experiences and the need for dignity in social care.  The candidates all agreed that whether or not they are elected Mayor, they will work with GM Citizens, UNISON, and the Care Workers for Change Campaign to implement the Greater Manchester Ethical Care Charter:

They undermine the safety, wellbeing and dignity of loved ones

They create a vulnerable workforce and undermine continuity of care

Including sleep-ins and travel. No place for poverty pay in social care

Protect our right to speak out without fear of reprisals!

GM Citizens is a community organising initiative which involves UNISON North West and 17 Greater Manchester branches.  GM Citizens involves a wide variety of organisations including Oxfam, Human Appeal, religious groups and students’ unions.  The event on the 1st of May was just the launch of this new organisation. Further events and campaign activity will be planned over the coming months to ensure that this new and powerful coalition of trade union and community organisations grows in size and strength. 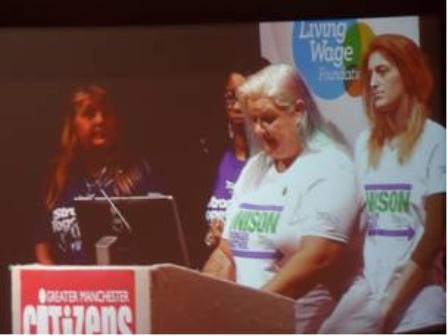