"I play a part in keeping our NHS going.  It’s only fair that I should get NHS pay." 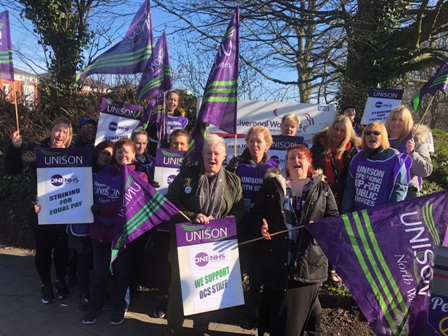 Liverpool Women’s Hospital staff employed by the private company OCS are set to resume their strike next week, taking action on Monday (11 March) and Wednesday (13 March).

More than 40 staff who work as cleaners, catering staff, porters and security officers will join the strike which has been provoked by the refusal of OCS to pay them the NHS rate for the job.  OCS staff on the minimum wage are paid £1 an hour less than if they were on the NHS rate – which costs them up to £2,150 this year alone.

UNISON has recently learned that managers employed by OCS have seen their pay increase by more than 10 per cent since the company took over the contract.  Managers now enjoy salaries close to £50,000, while frontline workers are struggling to get by on the minimum wage.

Kerry Cornwall is a catering assistant at the Liverpool Women’s Hospital.  She is employed by OCS and is taking part in the strike.  She said:

"An extra pound an hour would mean I can possibly take my kids on a small break, or make their birthdays or Christmases a little more memorable. It wouldn't make me rich, but it would make my life a little richer by taking some of my constant financial worry away.

“And I do play a part in keeping our NHS going.  It’s only fair that I should get NHS pay."

Julie Copeland is a Ward Sister at the Hospital.  She said:

"The OCS staff should get the pay that they are entitled to.  They go above and beyond every day in helping us to care for patients.  They're as much part of our team as anyone and they should be recognised and paid equitably."

“NHS pay rates were increased last year nationally to reflect that low-paid staff are really struggling to get by.  Pay rises were targeted to those who are lowest-paid.

“But OCS have decided not to pay their frontline staff the proper NHS rate for their job, and instead leave them on the minimum wage.  Meanwhile, they have found the money to bump up the pay of their managers.

“The NHS is based on the principles of fairness and equality, but OCS seem to think that it’s OK for them to turn that on its head and impoverish frontline workers while favoured managers get arbitrary pay rises.

“OCS need to recognise that all hospital workers should be treated fairly and they should be paid the NHS rate for the job.  If OCS don’t understand that, they have no business operating in our NHS.”