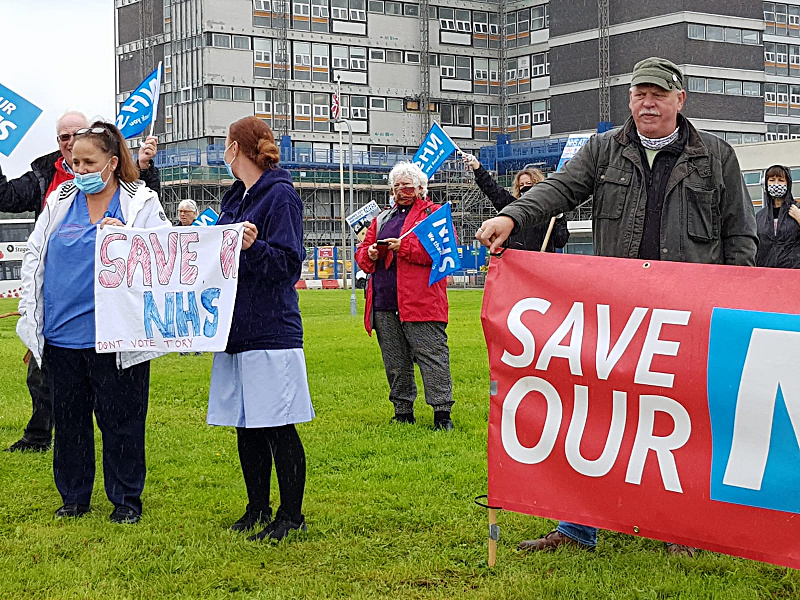 Campaigners held a bike and car cavalcade on 4 July to highlight “300 unnecessary Covid deaths” in Liverpool. The route circled Liverpool Women’s, the Royal and Aintree Hospitals as part of the NHS 72nd birthday celebrations, highlighting government failures to cope with Covid-19. The cavalcade was organised by Keep Our NHS Public Merseyside and Save Liverpool Women’s Hospital.

Socially-distanced rallies outside each hospital thanked health and care workers and called for the NHS to be rebuilt, bringing it back to full public ownership, with proper pay and respect for all NHS and care staff. Campaigners also called for an end to racism and all migrant charges, keeping the health service out of trade deals, putting public health back in public hands, and for the radical reform of social care.

The Government claims 1,684 people in Liverpool have had Covid-19, but this figure omits testing by commercial companies, overseen by accountancy firm Deloitte which is not required to report positive cases! Most people have never been tested. The Medical Research Council estimates 745,000 cumulative cases in the North West, suggesting around 50,000 people in Liverpool have actually been infected so far.

“Experts agree that the government caused around 25,000 additional deaths by delaying the lockdown,” said retired public health academic Dr Alex Scott-Samuel. “Untested patients were also discharged to care homes before Easter. It means over 300 people in Liverpool died unnecessarily because of the direct incompetence of Boris Johnson, Matt Hancock, and Simon Stevens.”

NHS staff have been stretched to the limit to save lives. We recognise their irreplaceable work and the critical role played by women in this crisis who make up 77% of the NHS workforce. They are often lower paid and with additional responsibilities at home. Black and Minority Ethnic patients have died disproportionately, even while working as doctors, nurses, cleaners, in care homes and on public transport. Migrants face NHS charges and may be reported to the Home Office if they can’t pay. Fear keeps people from seeking treatment.

“You don’t know if you have Covid if you’re too scared to see a doctor,” said Consultant Microbiologist Dr Jonathan Folb. “We cannot defeat this pandemic if people are too scared to be tested, treated, or participate in ‘track and trace’. We ask our hospitals to tell the people of Liverpool that no-one will be charged for seeking treatment or reported to the Home Office while we fight Covid-19. The health of everyone depends on everyone being looked after now.”