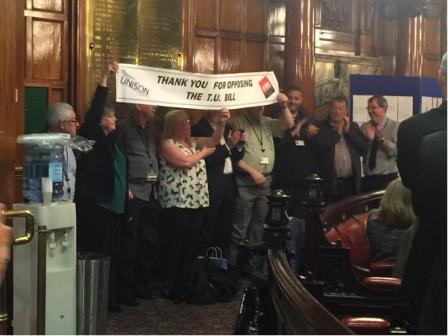 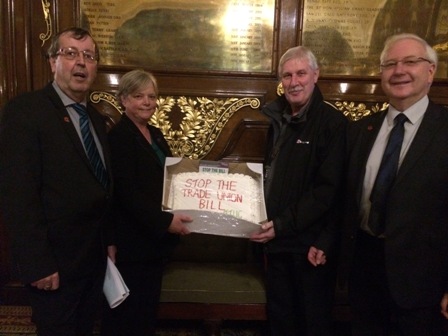 The fight to stop the Trade Union Bill continues.

Last night, Liverpool City Council voted unanimously to support a motion that is critical of the Government's Trade Union Bill.

The motion was moved by Councillors Joe Hanson and Frank Hont.  The motion describes the Trade Union Bill as a "direct attack on Trade Union activity" and called for the Council to do "all in its power and within the Law to ensure that this piece of pernicious legislation does not impact upon members of its workforce".

UNISON Liverpool Branch Secretary Babs Hennessy along with Bobby Damiels from the GMB were in attendance to thank councillors for taking a stand on this crucial issue.

The full text of the motion is copied below:

"The Government has published its Trade Union Bill which is designed to restrict the ability of trade unions to organise and take industrial action. The Bill includes wide ranging measures and a great deal of detail. It makes it harder for trade unions to win ballots for industrial action which will only be lawful if there is a 50% turnout among trade union members entitled to vote.

The Conservatives are seeking a further requirement for those working in ‘important public services’ to secure the support of 40% of ALL trade union members. Non-voters will be counted as ‘against’ industrial action.

No such thresholds apply to elections in local government, for police and crime commissioners, or in European or Westminster elections.

The Conservative Government wants to remove the ban on employers using agency workers during a period of lawful industrial action.

The Government intends to grant Ministers the power to reduce the amount of facilities time agreed by employers which is currently in place to ensure adequate workplace representation.

This Council believes that -

1.     The right to strike and protest are fundamental rights which should be respected in a free and democratic society.

2.     The Conservative Government’s proposals will undermine constructive employment relations and that harmonious industrial relations are achieved by meaningful engagement and not by putting additional legal restrictions on trade union members.

3.     Workplace representation ensures access to justice and has proved to be beneficial to good industrial relations.

Liverpool City Council believes that this proposed piece of legislation is not conducive to good Employer/Trade Union relationships and that it seeks to create discord where none exists. Part of this Bill seeks to remove the ability of public authorities to deduct Trade Union subscriptions directly from employee wages – this could be seen as a direct vicious attack on Trade Unions ability to organise effectively.

The Right Honorable Nick Bowles MP Minister of State for Skills is quoted in Hansard as saying that Trade Union dues (deduction at source from employee wages) should not be collected at the expense of taxpayers. In doing so he clearly fails to realise that the Trade Unions pay for this facility – and have done since its inception in this authority. Clearly there seems to be a lack of knowledge or ignorance demonstrated which could suggest that this Bill is not about finance but rather a direct attack on Trade Union activity which could have implications for various workforces in the country.

In the event that this Bill is approved, Liverpool City Council will do all in its power and within the Law to ensure that this piece of pernicious legislation does not impact upon members of its workforce.

The City Council therefore resolves to –

1.     Write to the Secretary of State for Business, Innovation and Skills stating Liverpool City Council’s opposition to the Trade Union Bill and on the basis that the measures in the Bill are unfair, unnecessary and undemocratic.

2.     Support the North West TUC in campaigning to oppose the Trade Union Bill.

3.     Continue to value the importance of meaningful workforce engagement and representation."