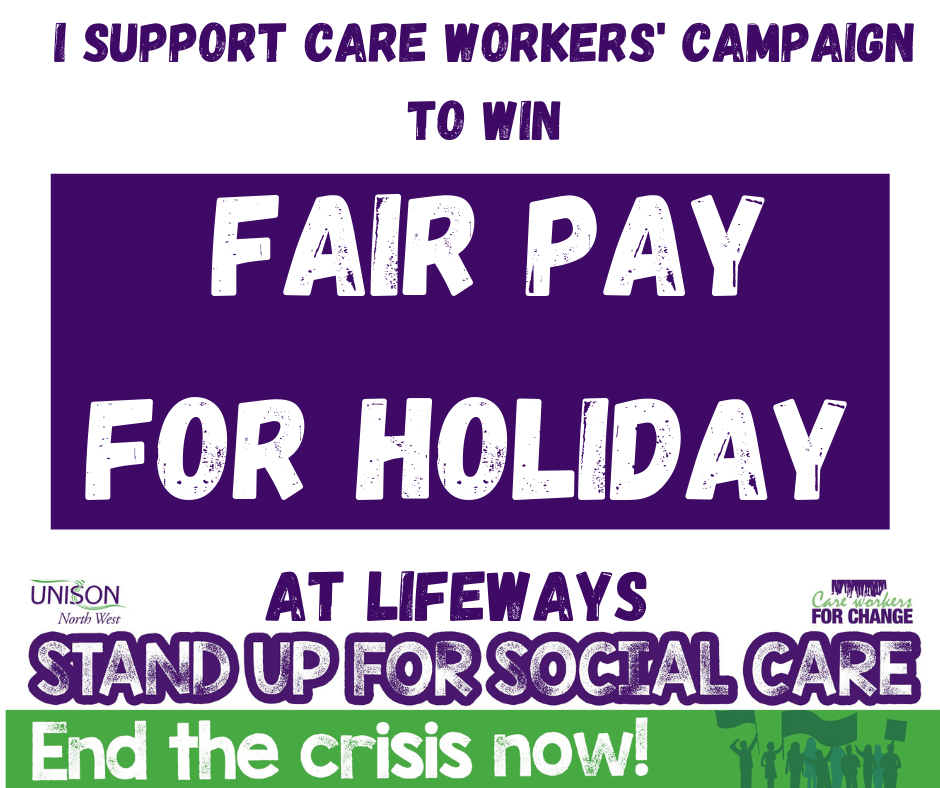 At the height of the Covid pandemic in late 2020, a group of members at Lifeways Care contacted their local UNISON reps for advice regarding underpayment of holiday-pay. Members were aware that they should be receiving holiday-pay based on average pay received and not just basic pay.

Members were asked to provide copies of their pay-slips and it was quickly established that their employer hadn’t factored in sleep-in shifts and overtime when calculating holiday-pay.

A campaign plan was devised whereby members would get the word around to colleagues about what was going on and what action they would be prepared to take. From this it was quickly decided that members were angry and wanted to pursue both a collective grievance and a political campaign to highlight all the problems they were having with this employer.

With the aid of regional colleagues, an open letter was agreed and circulated to MPs and Councillors so they knew what was going on. Particular focus was placed on councillors in authorities that commission Lifeways. This won us much needed publicity and showed us we were not alone. Many workers have held  virtual meetings with their local MP and Councillors for the first time and have provided powerful testimony on what it’s really like working here and dreading pay day.

The collective grievance was supported by almost 200 members from across the region and was lodged just before Christmas 2020. After a 6-month campaign, we are now finally seeing progress as Lifeways this week (April 2021) issued members with schedules of holiday pay enhancements. This was only achieved by support worker members in Lifeways standing together and challenging their employer collectively.

By standing together and supporting each other, Lifeways members have:

The campaign doesn’t stop here. There are still issues that Lifeways members have raised that need addressing and members are holding meetings to move forward on these issues.

UNISON members in Lifeways have shown that companies who refuse to pay their staff correctly will be held to account by their staff.

If you think any of these issues affect you in your workplace, please contact us as soon as possible.