Join Us at the Demo on Sunday

As the Conservative Party gathers on Sunday for its annual conference in Manchester the city will play host to a national demonstration with a clear message: ‘No to Austerity, Yes to Workers’ Rights’.

Amongst the marchers will be Gemma McIlwaine (29), her partner Paul (32) and one-year-old son Bob from Manchester.  Gemma has worked at the Council’s contact centre for eight years, taking calls from the public about environmental services, licensing and pest control.  Gemma’s family has been hit by austerity and inadequate employment rights:

“We haven’t had a proper pay rise for years and I’m worried about the future with cuts to tax credits and the threat to free school meals.  If I were a lone parent I couldn’t afford the house - I think I’d be in a hostel.

“My partner Paul is self-employed.  He works very hard but we can’t be sure what hours he will get and he didn’t get any sick pay when he was hurt.

“There are so many people just struggling to get by.  People are worried about losing their jobs or having their pay cut or having their working hours changed.  We all need secure jobs and proper rights at work.

“I hope the Tories will stop drinking champagne long enough to take notice of the demonstration.”

“The Tories are planning to cut tax credits by £1,000s per year for ordinary families next April.  Households across the country are already really struggling and it is not right that more pressure is being heaped upon them.

“Working people will be more vulnerable if the Government continues with its attacks on trade unions.  This will make it harder for workers, especially in the public sector, to stand up against cuts to services and pay.

“The Government wants to spend the next five years transferring wealth, income and power to the very rich.  It’s time that they listened to people and stopped causing such damage to our society.”

The rally will be assembling on Oxford Road, south of All Saints Park from 12 noon on Sunday 4 October.  Speakers will address the demonstration from 1pm.  The route takes marchers into the city centre and around the site of the Conservative Party Annual Conference.

More info about the demonstration is available here. 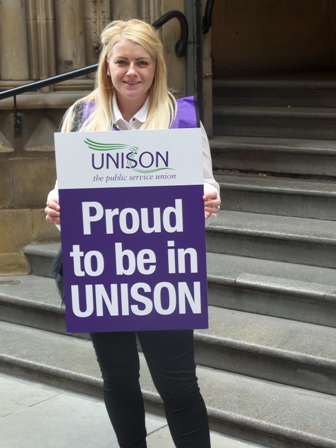