UNISON is supporting Joe Anderson to be the Labour candidate for Mayor of the Liverpool City Region. 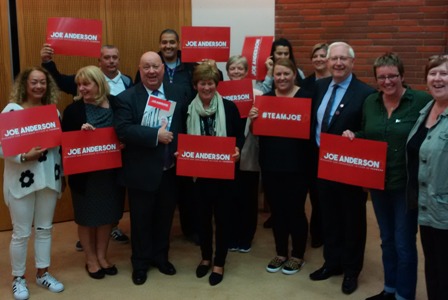 Joe Anderson cares passionately about the people and communities of the Liverpool City Region and has argued for a 'Metro Mayor' for over fourteen years to drive the area forward.  Joe has been an active trade unionist all of his working life and is a member of UNISON.

Ballot papers are being distributed this week and UNISON Labour Link is recommending that party members vote for Joe to be the Labour candidate.  In making our recommendation, we have taken soundings from branches and have received especially positive support from those that have worked most closely with Joe.

"The trade unions and the Labour Council in Liverpool have endured some exceptionally challenging times over the recent past as a result of vindictive and unnecessary Tory cuts, but there is a real commitment on both sides to working jointly to protect jobs and services.  Joe Anderson has played a huge part in ensuring that UNISON has been able to have our voice heard.  Joe has also been vocal in his criticism of the Tories' Trade Union Bill and has worked with UNISON to oppose the Bill."

"Joe has been through very challenging times as Liverpool's council leader and Mayor.  Liverpool and the region has suffered very badly from massive cuts to funding from the Conservative Government.  Joe has worked tirelessly through this period to sustain essential services, keep the public sector going and encourage investment into the city.  We feel the experience and knowledge Joe has gained from being at the sharp end of public service makes him the best candidate for this position."

You can read Joe Anderson's letter to union members here.