Jobs, Services and Democracy at a TTIP-ing Point 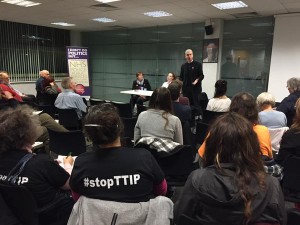 This week, I had the pleasure of chairing a packed meeting about TTIP – the ‘Transatlantic Trade and Investment Partnership’.  Despite its mysterious language, TTIP is really important and we all need to know about it.

TTIP is a trade deal that is currently being negotiated in secret by the EU and US.  TTIP involves an attempt to harmonise regulations between the EU and US.  This would cover important safeguards on health and safety, food, environment, privacy and labour standards.  For European workers, consumers and citizens, there seems little to gain from this.  TTIP is driven by business interests and the push for the harmonisation of regulation is not about levelling up – it is really a push for deregulation.

A key proposal under TTIP is the introduction of Investor-State Dispute Settlements (ISDS).  ISDS would allow transnational corporations to sue governments directly for the loss of any future profits resulting from government action.  Where trade agreements with ISDS arrangements are already in place, multinational companies are using them to try to overturn the decisions of national governments:

Under TTIP, the proposal is that the ISDS tribunals will be heard by corporate lawyers, who can take decisions against governments without a right of appeal.  This is a serious threat to our democracy.

The EU’s own research indicates that the introduction of TTIP would cost 600,000 European jobs.  TTIP is billed as being good for the economy – but it is big business that would gain, not workers.

UNISON North West will work with organisations like War on Want and the World Development Movement in the coming months to campaign against TTIP and other trade deals that enhance corporate power over our democracy.  Momentum is building around this campaign and it is a very important one to win.

There’s more information on TTIP, and a petition Here.