Great victory for members at Wrightington, Wigan and Leigh as the Trust withdraws outsourcing plan. 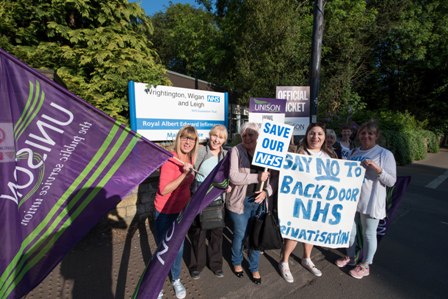 UNISON members at Wrightington, Wigan and Leigh are celebrating a great victory as the Trust has scrapped its plan to outsource 900 staff including cleaners, porters and catering staff.

Members have been resolute in their determination to stay in the NHS, voting repeatedly against the Trust’s outsourcing plan and taking nine days of strike action.

The Trust has come under increasing pressure to change course due to the strength of staff opposition and the support of the public for keeping the NHS together.

Last week, there was little sign that the Trust would change course.  Staff received letters informing them that they would be transferred to the new private company WWL Solutions on 1st August, and Chief Executive Andrew Foster was continuing to support the outsourcing plan publicly.

But on Friday, Wigan Borough Council agreed a financial deal with the Trust which will mean that the WWL Solutions plan will not go ahead.

The UNISON strike committee met late on Friday afternoon and in emotional scenes, decided unanimously to end the dispute.

“This is an extraordinary victory for the staff who have been so strong in standing up for the NHS.

“These are staff who are dedicated to their work and to patients, and they simply wanted to carry on being NHS employees.

“They have fought back bravely against plans that would have broken up the service.  I’m absolutely delighted that the staff have won this dispute and will continue to be part of the NHS team.

“As Councillor Keith Cunliffe said, the Labour and trade union movement united can make a big difference. This victory shows that when ordinary working people stick together, the people in power have to listen.”