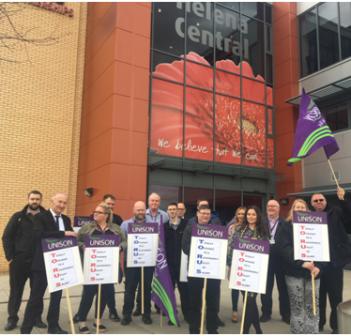 UNISON members at Torus in St Helens and Warrington have voted to take strike action for a decent pay rise.

The staff work in a range of roles including administrators, customer service advisers, housing officers and maintenance staff.  Staff have experienced years of falling living standards and could now walk out later this month.

In the ballot, nearly three-quarters of respondents were in favour of industrial action.   The result meets the demanding thresholds that were set by the Conservative government and gives a mandate for UNISON members to take lawful industrial action if necessary.

Acas talks between unions and Torus bosses have been arranged to take place tomorrow (Wednesday).

“The ballot result shows that staff are serious about getting a decent pay rise.  Torus bosses need to stop ignoring staff.  They need to make an offer that ends the attack on workers’ living standards.

“Torus is doing well financially and could easily afford to pay staff a decent increase.  They have found 6% for their highest-paid Board member.

“Torus needs to act now to avert the possibility of strike action.”