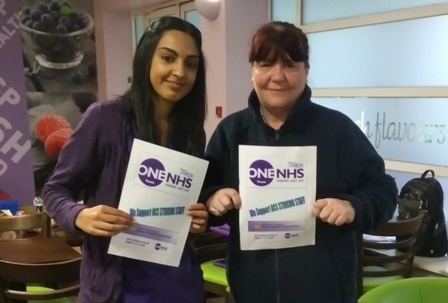 More than 40 staff who work as cleaners, catering staff, porters and security officers plan to join the strike which has been provoked by the refusal of OCS to pay them the NHS rate for the job.

The lowest pay rate for a worker in the NHS is £8.93 per hour, but the OCS staff are paid considerably less than this with some only receiving the minimum legal hourly wage rate of £7.83.  Staff are losing out by up to £2,150 this year alone.

In the formal ballot 100% of staff voted in favour of taking strike action.

Other staff doing the same jobs at Liverpool Women’s Hospital and at other hospitals are being paid the correct nationally-agreed pay rates for NHS workers.

At the nearby Walton Centre, a strike was averted in similar circumstances earlier this month.   More than 80 staff employed by the company ISS voted to take strike action, but the Walton Centre Trust stepped in to commit to staff that they will receive the NHS rates of pay.

Stephanie Mahoney works as a domestic at Liverpool Women’s Hospital.  She is paid the minimum wage of £7.83 per hour:

“It’s a real struggle to cope on the wage that I’m on.  I’m a single parent and I need to keep a roof over my son’s head.  Gas and food bills keep going up for everyone but it’s harder for  us to make ends meet.

“I sometimes work alongside colleagues who are paid £9 an hour, but we’re doing the same work.  Colleagues are very supportive of us taking action to get this sorted out because they don’t think it’s right that we’re on lower pay than them.

“I’ve never been on strike before but I can’t see how else this is ever going to change.  We’re all sticking together.”