Hospital Staff to Strike on 23-24 May 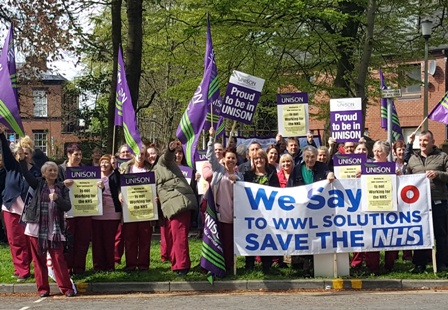 UNISON has given Wrightington, Wigan & Leigh Foundation Trust notice that members who work in roles including catering, cleaning and portering will be on strike for 48 hours.

The strike action has been prompted by the Trust’s proposal to outsource NHS workers’ jobs to a new company called WWL Solutions.

Management have sought to justify the plan as a necessary cost-saving initiative.  However, Chief Executive Andrew Foster recently described in the staff newsletter how the Trust has met its financial plan for the year and has achieved a bottom-line surplus of £8.6million.  He thanked all staff for their continued efforts.

In a formal industrial action ballot of affected members that closed last week, 89% voted YES to strike action with a 73% turnout.  Nearly 600 UNISON members are set to take part in the strike.

“The recent news about the Trust’s financial position shows that the outsourcing plan is not necessary.  Staff are very upset and angry that they have contributed to the success of the Trust and are now having their wishes ignored by senior management.  They don’t want thanks, they just want to be allowed to continue working directly for the NHS.

“A strike now looks very likely.  Time is short and the Trust needs to listen to its staff and act now to ditch the WWL Solutions proposal.”