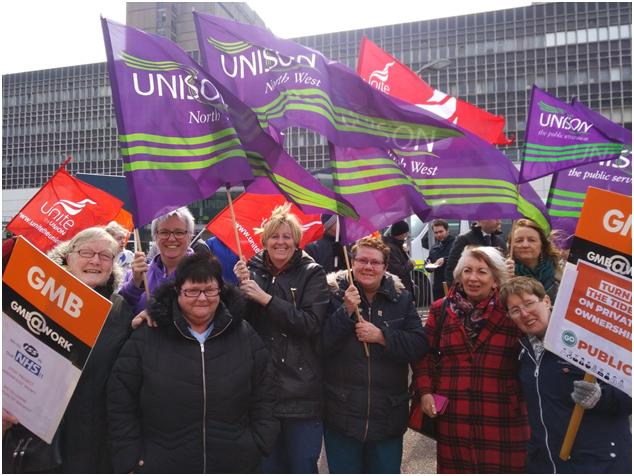 Staff employed by the multinational outsourcing company ISS at Liverpool Royal and Broad Green hospitals are planning to take strike action from Thursday 30 May.

The staff work as catering, cleaning and portering staff and most are paid only the minimum wage rate of £8.21 an hour.  The lowest rate for NHS staff is £9.03 an hour and the difference of 82p an hour is worth some £1600 a year for full-time staff.

“There is a real injustice here.  All hospital workers should be paid the NHS rate for the job, but at the Royal and Broad Green ISS choose to pay staff only the minimum wage.  This makes a huge difference to low-paid workers in our city who are doing essential jobs in our hospitals.

“Staff feel very strongly that this is unfair and that the situation needs to change.  In similar circumstances, UNISON members at the Women’s hospital successfully won the NHS rates of pay after taking strike action.  At the Walton Centre, ISS workers are now paid the NHS rates after UNISON members voted overwhelmingly to take action.  Our members at the Royal and at Broad Green are just as determined to win the a fair rate of pay for their job.

“We are looking now to ISS and the trust to sort this matter out.”