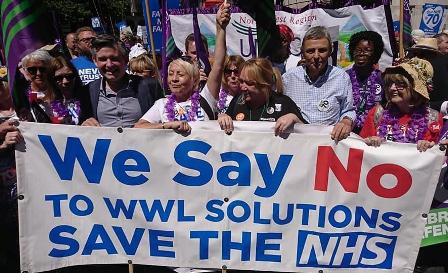 UNISON has given the Wrightington, Wigan and Leigh Trust notice of a seven-day strike beginning on Tuesday 17 July at 6am.

This will be the fourth period of industrial action taken by UNISON members who work in roles including portering, cleaning and catering.  The strike action has been provoked by the Trust’s plan to outsource nearly 900 staff to a private limited company.

The campaign has received backing from the public and from senior national and local politicians including Jeremy Corbyn, Lisa Nandy, Jo Platt, Yvonne Fovargue, and Keith Cunliffe.

Tina Fox (44) has worked as a domestic at Wigan Infirmary for over three years.  Tina was on the march in London.  She said:

“We are Wiganers loud and proud and we made our presence known on the march.  The support we received was phenomenal and it was great to be part of such a big event.

“We have a real sense of strength.  We want to work for the NHS, not for WWL Solutions.  We’ve got each other’s backs and we’re going to stick together and fight this all the way."

“Staff are resolute in their determination to keep the NHS together.  The last few days have seen very strong strike action across the Trust’s hospital sites.  Staff are receiving tremendous support locally and from people who care about the future of the NHS right across the country.