First they Clap Us, then they Slap Us 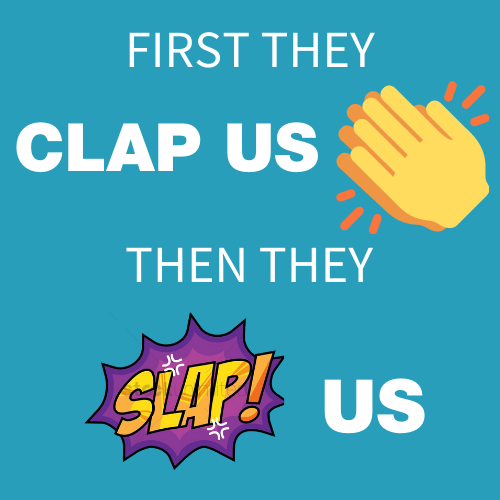 UNISON is holding a consultation of local government NJC members across England, Wales and Northern Ireland to decide whether we accept or reject the NJC Employer’s side offer of a 2.75% pay increase for 2019/20.

The consultation runs until 11 August and will be conducted by your local branch. UNISON’s local government consultation procedures allow for branches and regions to make their own recommendations to members.  In the North West our Regional Service Group, made up of representatives from each branch, agreed to recommend to REJECT the offer.

To set out the reasons why NJC workers are worthy of fair recognition we have launched the First They Clap Us, Then They Slap Us campaign.

Throughout the pandemic local government workers, including thousands of UNISON members, have played a vital role in supporting people, communities and businesses and keeping essential local services going. From highly visible services such as bin collections, to less visible services such as processing benefit payments, to lifeline services such as preparing and delivering essential supplies to vulnerable and shielding residents, our members have shown the true spirit of public service and shone a light on the too-often-forgotten importance of local authority provision. As millions of people and politicians of all parties stood on doorsteps to applaud key workers we heard Government ministers say that local authorities would be “given what it takes”. We believe that has to translate to include fair recognition and a fair pay offer for our NJC members.

Which is why the 2.75% pay offer is a slap in the face for all NJC workers at this time. Here's just a few reasons why:

To ensure that your voice is heard in the ballot, we need an up-to-date email address so we can contact you about the consultation. Update your details online by visiting unison.org.uk/my-unison

On Thursday 9 July at 7pm, we launched the First They Clap Us, Then They Slap Us campaign via a Facebook Live stream hosted by the UNISON North West Facebook page. You can watch the full video below.

Our panel on the night: