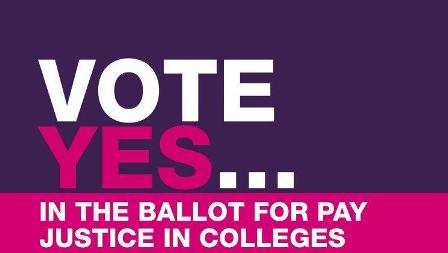 The ballot opened on 6 January and closes on 29 January.

The ballot follows a consultation which saw UNISON members reject the employers’ “pay offer” of 0%.

The ballot covers all union members who work in further education in England whose pay is covered by the Association of Colleges and where a local agreement hasn’t been negotiated.

“Members in FE in England have been offered no pay increase by the national employers,” noted national secretary Jon Richards.

“Some have lost on average £3,000 in real terms over the last five years.

“Our members are key to delivering the changes coming to the sector and having faced wave after wave of job cuts those remaining deserve to be properly rewarded.

“We want our members to respond to the ballot and send a clear message to the employers that they need to pay up.”

The government’s recent comprehensive spending review was less harsh on further education funding than had been predicted and UNISON believes there is money available in colleges for the pay members deserve.

You can find out more about the dispute, and download or order key resources including a ballot poster and leaflet at unison.org.uk/FEpay2016.