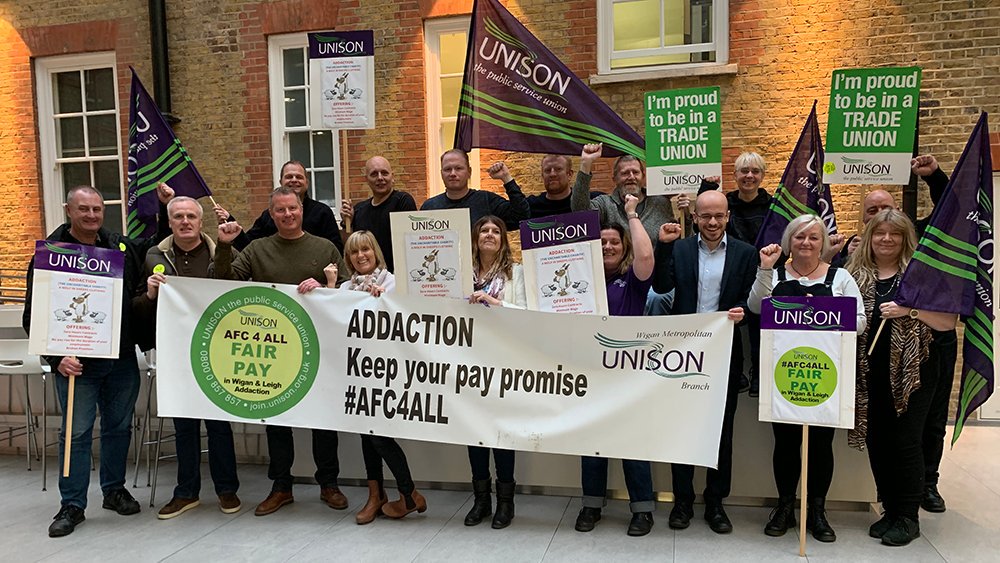 Drug and alcohol rehabilitation workers in Wigan and Leigh are to strike for five days – from Thursday 27 February until Wednesday 4 March – in a long-running dispute over pay.

The drug and alcohol support workers took eleven days of strike action in 2019, but decided to postpone further action until after Christmas in the best interests of service users.

In the mean time, the Addaction employees, who were employed by the NHS before Wigan council transferred their roles to London based charity Addaction, have voted unanimously to take further strike action this year.

A one-off payment offered to employees by Addaction, following 11 strike days between August and November 2019, was rejected due to a lack of guarantees about future pay increases, UNISON said.

The industrial dispute will pose Addaction bosses a headache, especially as they are planning to launch a high profile rebrand of the organisation later this month.

Paul Almond, a support worker and UNISON rep said: “We’re all determined to see this through.  Addaction’s offer falls well short of what we would have had in the NHS.  Even with the money they offered I’d be down by £2,000 compared to what I would have earned.  We just want what we were promised by Addaction.”

“A one-off payment doesn’t come close to addressing the long-term pay issues that led to eleven days of strikes last year and is fuelling more strike action this year.

“Workers have raised concerns about a range of issues, not just pay. They’re worried patients aren’t getting the service they deserve because of low staffing levels and management failings.

“Staff have the support of their union, politicians and the community and are determined to fight for fair treatment and a quality service.”